Pretty short chapter this time, this book can be like that. One chapter can be nigh on a hundred pages long, and another only a few scant paragraphs. But you can always trust in old Ishmael (or rather, Melville) to have some point to his chapterage, even if it is, at times, a bit obscure. Much like the name of this chapter, an old fashioned word that simply means “blanket” or “quilt”. 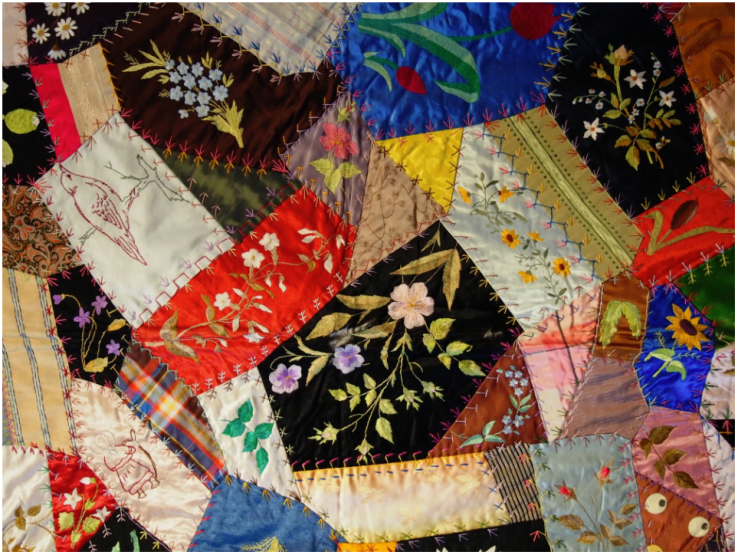 SUMMARY: Ishmael awakes to find himself in the loving embrace of Queequeg, and has trouble waking him up. Queequeg finally gets up, and gets dressed in a strangely roundabout and comical way, then goes down to breakfast.

So, it’s time to talk about Queequeg. This is a subject where context can be very helpful when it comes to being charitable to Melville in his depiction of this famous south pacific islander. Melville was quite familiar with the region from which Queequeg hails, having spent many years there as a sailor in his youth. Indeed, the books that actually made him money as an author (Moby Dick was a miserable flop on publication) were rollicking south-seas adventure stories, called Typee and Omoo. So this isn’t just a random choice, but rather something that Melville can speak of from personal experience.

Now, in the last chapter, Ishmael decided to give in and sleep in the same bed as Queequeg with the logic that “it is better to sleep with a sober cannibal than a sober christian”. This opened up the ol’ can o’ worms regarding “savages” just a crack, which this chapter then blows wide open. The dichotomy between savage and civilized people is taken for granted, and Queequeg is talked of as being between the two states of existence.

“Savage” is, of course, the epithet used for those people who were not a part of the great European “civilization” that had risen to dominate basically the whole world at this point. It sets apart those who had not been absorbed into this monoculture, those who had yet to be broken by the wheel of colonization. The classic trope, employed a bit here, is to say… maybe these so-called savages are actually… better than us, more pure, closer to the earth, etc etc.

This is all pretty questionable, the kind of thing that you see in a book from the 19th century and just roll your eyes at, and endure. However, the characterization of Queequeg is a bit more nuanced and interesting than the simple noble savage archetype that we all know and dread. The main thing about Queequeg is that he’s not stupid, just different. He’s incredibly competent at everything he tries his hand at, he just has a different set of assumptions about how the world works.

This is the thing that Ishmael has no problem with, fundamentally. People are allowed to be different, the nature of those differences are basically immaterial as long as they don’t get in the way of living your life.

I’ll get back to this topic later, when it becomes more relevant again.

Anyway, this chapter also has one of my favorite long, meandering asides. When Ishmael is pinned in his bed by Queequeg’s loving, homoerotic, husbandish embrace, he is reminded of a very evocative memory from his childhood. The story is basically a time when he experienced sleep paralysis, after being sent to bed early on the longest day of the year. He awoke unable to move, with a sense of some mysterious figure in the room with him. Textbook sleep paralysis, pretty interesting to see it crop up here. Ishmael says that being stuck under Queequeg’s arm was similar, but not terrifying at all, just annoying.

There is quite a bit of this sort of content in this book, that comes off as not a little bit queer to our modern eyes, in the modern interpretation of that word. But, the past is a foreign country. In the 19th century, such affection between male friends was simply the norm. Of course, you’re free to read into it all the subtext you want, nobody’s gonna stop you.

Two more fun things to note before we finish up, both from the breakfasting scene at the end of the chapter:

1. Queequeg shaves himself with his harpoon. This is described as “using Rogers’s best cutlery, with a vengeance”. This is one of those things your eyes probably just slide right over and say “oh sure, some reference to some old timey thing, whatever”. And indeed it is, a reference to William Hazen Rogers, a famous silversmith who designed many silverware patterns that are still used to this very day.

2. “With a vengeance”? It seems a bit odd to see that little idiom show up in a book some one hundred and sixty years old. But, as it turns out, “with a vengeance” has been a part of English common usage since the 16th century, as far as I can find. I had always assumed it was coined by the title of the Die Hard sequel, but it makes sense that it’s old, vengeance is certainly an old idea.

Well! I managed to wring a bit of blood out of that short, sweet chapter. The next few chapters are also pretty short, but I’m sure I’ll find something to go off about in them. As always, you can follow along with the full text of this ancient tome on Project Gutenberg.