Here we go, this is the chapter where the book really kicks into gear. There’s a lot that happens, but one particular section is very intriguing to me. It connects deeply to my whole thesis for interpreting and understanding the book, as a fictional artifact and a work of literature. SUMMARY: Ishmael enters the Spouter-Inn, meets the proprietor, and discovers that all the rooms are booked. But, he is offered to share a bed with one patron who has not yet returned that evening, a harpooneer who is off “selling his head”. Ishmael agrees, reluctantly, and settles in for the evening. He eats dinner with a taciturn and silent collection of fellow sailors, and then meets a raucous grew returning from a long whaling voyage. Ishmael decides he really can’t deal with sleeping two to a bed, and tells the landlord he will sleep on a bench in the parlor instead. But, the bench proves too uncomfortable, so he is forced to go up to the harpooneer’s room. At first, Ishmael is certain that the harpooneer will no return that night, but he eventually shows up, and is Queequeg, a pacific islander covered in strange tattoos, with strange habits. Ishmael first yells in alarm when Queequeg finally enters the bed with him, but is calmed down by the landlord, and they go to sleep together.

Whew! There’s a lot, and I’ve even left out quite a few little details here and there. But, what I want to focus on is The Oil Painting, which I didn’t even mention in my summary, as it isn’t really something that happens, per se.

Ishmael mentions that when you first enter the Spouter-Inn, as he does, you are greeted with a huge oil painting in the entryway. This oil painting is positioned in an odd way, not clearly lit, and extraordinarily vague, dark, and confusing to the eye. He describes trying to puzzle out what, exactly, this painting is depicting, and the effort it takes to come to any satisfactory conclusion. 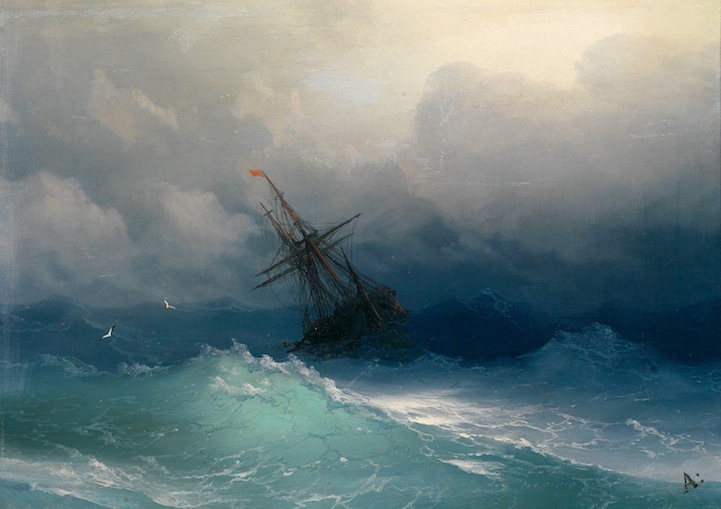 It takes several visits, opening windows to literally shed more light on it, conferring with other patrons of the inn who have also studied it. And even then, only wild and bizarre theories present themselves, until you really sit down and study it very, very closely.

He finally figured it out, in the fullness of time, and discovered that it was a ship foundering in a storm, with an enormous whale attempting to leap over it, but impaling itself on the masts.

This painting works as a metaphor for the book itself. Or rather, the painting is the events that the book is about, a series of strange and obscure events, difficult to interpret and hard to reckon with, at the end of the day. After all, everyone famously has their own private theories about what Moby Dick himself represents. The anecdote about the painting is another example in the theme of dutiful scholarship, which has been running through this book since before it even began properly! 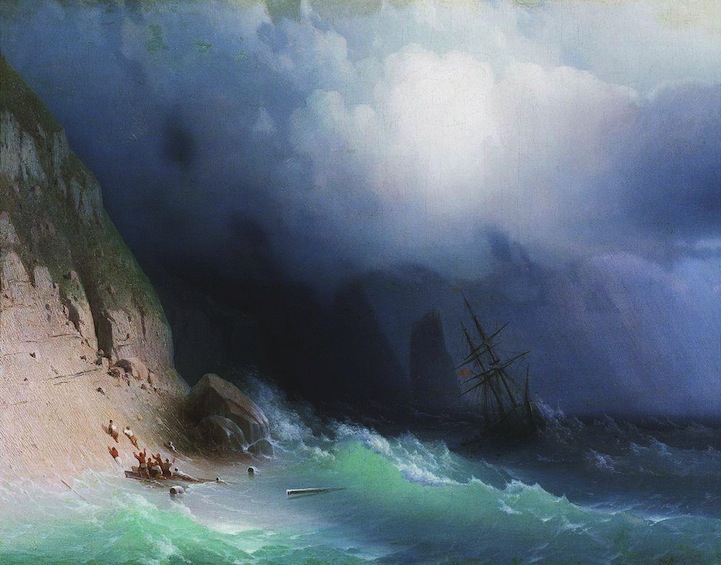 The section about the oil painting is a central part of my personal theory about this book.

FIRSTLY, it was written by a much older, more experienced Ishmael, after a lifetime of whaling voyages. In this particular little anecdote, he speaks of many subsequent visits to the Spouter-Inn, and we see that it is a favorite haunt of sailors just returned from whaling voyages. This would also explain his expertise with the finer points of whaling, as seen in non-narrative chapters later in the book.

SECOND-OF-LY, the book, as a fictional artifact, which is to say a book written by Ishmael about his experience on the Pequod, is an attempt to make sense of this experience through the project of writing down both those experiences as he understands them, and everything he knows about whales and whaling. Not to spoil things, but at the end Moby Dick sinks the ship and everyone is killed except for Ishmael. This shatters him, utterly, and he spends the rest of his life obsessing over whaling, and that voyage in particular.

This feverish scholarship, the need to really understand the entirety of what happened on this ill-fated voyage, is what the book is. But, Ishmael knows that he cannot actually fully comprehend what happened on that original voyage. This is all idle, the project is ultimately a failure, he cannot fully explain the actions of even a single whale, much less systematize the existence of their whole race. 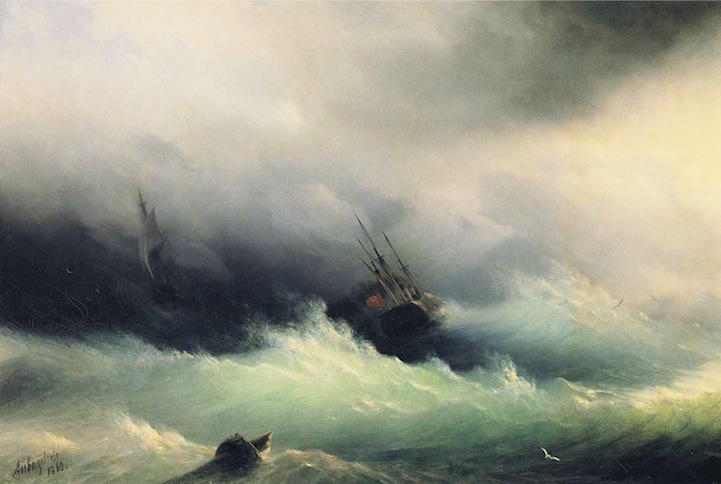 But that doesn’t mean he’s not going to try. As with the oil painting, he believes that it is possible to understand the world through thorough enough study, he just doesn’t believe that this effort that he’s put forth is enough. If only he could keep revisiting it! Shedding new light, and interviewing others who were there! But the world is too big and chaotic, it is not confined to the borders of a simple painting.

Anyway, a bunch of other stuff happens in this chapter too, I guess.

There’s a weird bit with this other whaling crew that has just come back into port. One member of the crew, one Bulkington (yes, really), quietly walks out. His character is attended, in the book, with a lot of significance and pomp. This mysterious hero is mourned by his friends, who leave to chase after him as soon as he leaves. Oddly, Bulkington will show up again in exactly one chapter, and exit the narrative just as mysteriously then.

The description of trying to get comfortable in a strange place under less than ideal circumstances is very, as they say, #relatable.

I now took the measure of the bench, and found that it was a foot too short; but that could be mended with a chair. But it was a foot too narrow, and the other bench in the room was about four inches higher than the planed one—so there was no yoking them. I then placed the first bench lengthwise along the only clear space against the wall, leaving a little interval between, for my back to settle down in. But I soon found that there came such a draught of cold air over me from under the sill of the window, that this plan would never do at all, especially as another current from the rickety door met the one from the window, and both together formed a series of small whirlwinds in the immediate vicinity of the spot where I had thought to spend the night.

Who hasn’t been there?

The close, deep friendship between Ishmael and Queequeg is central to the next few chapters, so I won’t get into it here. The phonetic accent that Melville writes for Queequeg is… a bit unfortunate, but not too bad. It’s a thorny issue, that I will attempt to unravel with all due sensitivity in the near future.

That’s it for this chapter! As always, you can follow along with the book over at Project Gutenberg. As tumblr is currently going down in flames, I am considering setting up an external blog for my writing, I’ll be sure to link it here when it goes live, once I decide upon a proper platform.

(I did that, and that’s why this blog is on wordpress now!)

2 thoughts on “Chapter 3: The Spouter-Inn”