I bet you never could’ve guessed this chapter title. Not in a million years.

In this chapter, we learn a bit more about the other whale, the one the southern whalers usually spurn, at least these days. And by “these days” I of course mean the 1840s, when this book was written. Nowadays, nobody is out hunting whales, except the Makah of the Washington coast, and the Japanese, probably.

SUMMARY: Ishmael takes us across the deck of the Pequod to examine the head of the right whale which still hangs there. He describes its anatomy, starting from its spiracles, then the crown atop its head, the inside of its mouth, and finally its tongue. In the end, Ishmael compares the postmortem expressions of the two whales, and declares that the right whale is a Stoic, and the sperm whale a Platonian, with a dash of Spinoza.

This chapter feels a bit less… serious than the last one, in tone. Only slightly, but you get the definite impression that Ishmael is having more fun describing the strange appearance of the right whale than he did the sperm whale. Again, owing to the fact that he, and every other southern whaler, takes it less seriously. This is not a deadly foe, it’s just a grazing cow, calmly going about its business when they slaughtered it, dramatic circuit around the Pequod notwithstanding.

The physiology of the right whale’s head is so bizarre, Ishmael is forced to compare individual bits of it to different things and try to assemble something of a picture of it in the readers’ heads. It didn’t work for me, but luckily this is the modern age, so I can just go do an image search and find one million pictures of a right whale. Behold!

It really helps a lot, I find. Especially with regards to the “crown” (also called a “bonnet”) which he describes, and I had no concept of. Apparently there’s some sort of hard spot on the top of their head, where all the “teeth” are anchored, and which tends to attract all sorts of parasites and critters and strange growths.

Ishmael makes great fun of this, calling the right whale a “diademed king” for its stately crown:

But if this whale be a king, he is a very sulky looking fellow to grace a diadem. Look at that hanging lower lip! what a huge sulk and pout is there! a sulk and pout, by carpenter’s measurement, about twenty feet long and five feet deep; a sulk and pout that will yield you some 500 gallons of oil and more.

Just a big pouty king of a whale. Anthropomorphizing the prey seems to be a pretty common thing among hunters of all types. Or, really, of anyone concerned with animals, except those researching them in a scientific context. Who among us hasn’t looked at a pet and ascribed human emotions and motivations to them? How far is it, really, from that to the heaping on of all life’s woes that Ahab is doing with Moby Dick? 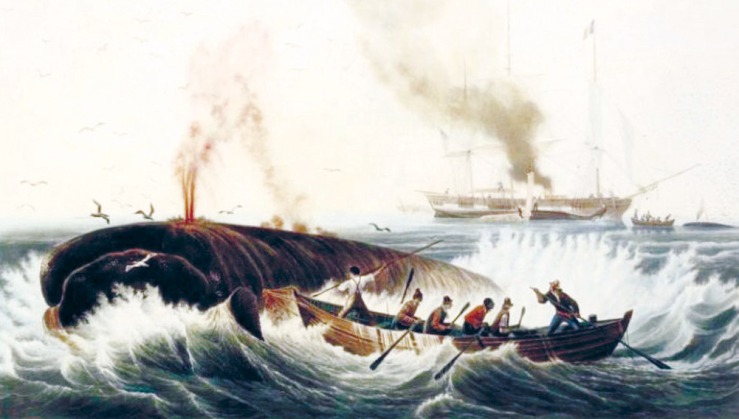 Sometimes, when I think about this book, I see Ishmael and Ahab as opposites. Ahab is all fire and manipulation, concerned with action and striking back against those who wronged him, obsessed with his own honor. Ishmael, on the other hand, is remote and tolerant. He hangs out on top of the mainmast and daydreams of philosophy while his captain is down on the deck planning his ruin. Thinking this can be mapped onto some sort of dichotomy of human life, those who seek to glory and legacy and those who turn inward to understand the external world.

But, really, they both fall prey to the same kinds of thinking. And this dichotomy is not so dichotomous when you realize that all of these thoughts and motivations are being assigned to Ahab by the fictional author Ishmael. He is seeking to explain the world in his own terms, as best as he can, and that includes the motives of the man responsible for his apocalyptic loss.

Oh! how the human project to understand the world is rife with peril. But, in this chapter, we see some indications that it is not so fraught as it may seem. Much fun is made of the whale facts in Moby Dick, mostly due to Ishmael’s famous insistence that the whale is a fish (which we’ve already discussed), but there are some interesting nuggets of truth here and there. For example: Ishmael knows that right whales use the strange feathery teeth in their mouth to strain seawater and eat the tiny creatures it catches in them. Just as he knew that sperm whales eat giant squid, the habits of these leviathans are not a complete mystery to these whalers.

It’s just that they are not really rooted in what we, from a modern perspective, would call a scientific and rational perspective. But why should they be? Ishmael himself has scoured the whale-related texts of the world, and collected the meager scraps he’s been able to find. The class divide keeps science from touching on relevant areas of his life for a hundred years or more.

Assigning human motive to an animal seems insane from the perspective of the shore, but on a ship for years, decades on end… it seems very understandable.

Anyway, I would be remiss if I didn’t touch on Ishmael comparing the heads to philosophical types at the end of this chapter.

Can you catch the expression of the Sperm Whale’s there? It is the same he died with, only some of the longer wrinkles in the forehead seem now faded away. I think his broad brow to be full of a prairie-like placidity, born of a speculative indifference as to death. But mark the other head’s expression. See that amazing lower lip, pressed by accident against the vessel’s side, so as firmly to embrace the jaw. Does not this whole head seem to speak of an enormous practical resolution in facing death? This Right Whale I take to have been a Stoic; the Sperm Whale, a Platonian, who might have taken up Spinoza in his latter years.

So: the sperm whale is Platonic because he didn’t care about being killed. This is probably a reference to the Phaedo and Socrates’ famous indifference to being executed with hemlock. The Phaedo is a dialog concerning the nature of the soul, with Socrates claiming that it must be immortal, and go on to some other sort of existence after death. Thus, he didn’t really mind being killed all that much, and neither did the sperm whale!

Man, it’s a bit confusing that the philosophy of Socrates is now largely associated with Plato, huh. I suppose picking out the stuff that was actually said by the illiterate teacher and the stuff that was invented by the student who carried his legacy is too difficult to really split hairs about. There are some who doubt if Socrates was even a real person! He may be a complete invention of Plato, to provide a frame for his own philosophy, and cover his ass if the Athenian council ever came after him with a cup of hemlock broth.

A lot of Platonic ideas seem kind of basic nowadays, because they form the bedrock of a lot of western philosophy. Stuff about the nature of the soul and different types of governments and whatnot are so built into the fabric of our everyday life that they hardly seem worth mentioning, but were radical in their day. Which, to be fair, was well over two thousand years ago.

The right whale, meanwhile, is somewhat perturbed, but keeps a stoic expression, like that famous stoic philosopher Seneca. The stoics were a bunch of nerds who believed that happiness could only be found in the moment, not from pursuit of pleasure or fear of pain. It was a philosophical school that believed that virtue was its own reward, that by being a good person by your own internal standards, you would live a good life.

It’s an interesting notion, and a very popular one, and at first glance it seems eminently logical and practical. But, to my mind, it disregards the nature of the human animal, which academics are always doing in one form or another (looking at you, economists). The stoics focus on Logic and Reason and try to couch everything in purely intellectual terms, treating life like it’s a great problem to be solved.

To this very day, the stoics are beloved of humorless scolds who want everyone to act like robots. “If I were presented with a moral quandary, I would simply use my brain to figure out the most correct answer”. What a bunch of buffoons! No respect for the rich emotional existence of humanity.

Anyway, isn’t it interesting that Ishmael imagines his prey as accepting death quietly, just in two different ways? It certainly doesn’t seem to line up with what we’ve seen whales actually do when they’re dying, roiling around in their own blood, churning the seas into a veritable storm as their last desperate revenge against their killers.

Ah, the arrogance of humanity! We allow Ahab his vengeful plunge in our imagination, but we cannot see Moby Dick in the same light. No, the subject of human violence must be placid and rational, or purely animalistic and unthinking.

Ahh, that one turned out well. It was fun to refresh my memory on the philosophy stuff. I don’t really remember what Spinoza’s whole Deal is, but I’m sure there’s some clever reference hidden in that as well. Also, I thought he was like a late 19th century guy? I dunno, he’s one of those ones who didn’t really make a strong impression.

I was really into stoicism for a while in college, but I grew out of it pretty quickly. Thus, the scorn I expressed.