Okay, this may be a little less philosophical than I remembered. 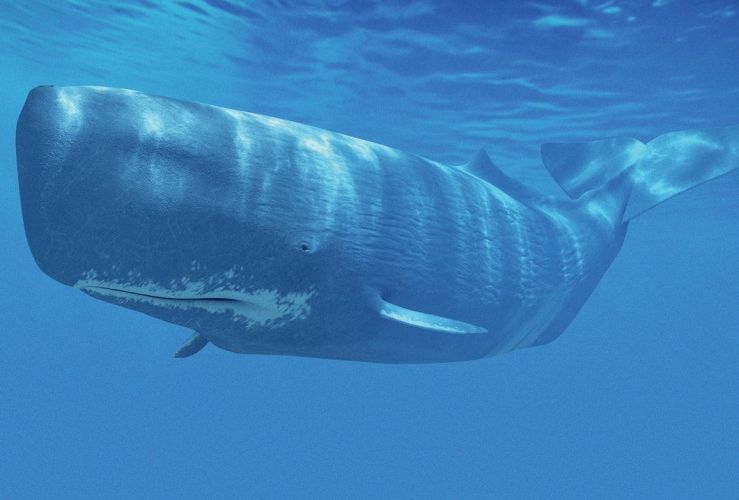 But, I will find a way to make it so, in my particular way. Not to say that Ishmael stays squarely on topic for the whole chapter, such a thing has almost never happened, but it isn’t the feast of direct philosophical references I was assuming. I guess it is just that one off-handed remark from the last chapter, where he calls one head Locke and the other Kant. I remember a lot about Kant from my philosophical studies, but little about Locke, so I couldn’t expand much on that anyway.

SUMMARY: Since they are so conveniently hanging from the sides of the ship, Ishmael decides to take us on a tour of the physiology of a right and sperm whale’s heads. First, he describes the general shape of the sperm whale’s head, then its eyes, it’s ears, and finally it’s massive jaw. The jaw is usually the first thing removed by whalers after the rest of the body is processed, the teeth are removed and the bone is cut into slabs so that it can be crafted into scrimshander by bored whalers.

So, we finally get an examination of some real whale heads, not just images of them or imaginings of them. Right off the bat, we can see (again) that Ishmael has a preference for one of the two:

Both are massive enough in all conscience; but there is a certain mathematical symmetry in the Sperm Whale’s which the Right Whale’s sadly lacks. There is more character in the Sperm Whale’s head. As you behold it, you involuntarily yield the immense superiority to him, in point of pervading dignity.

A sperm whale has more “dignity” than a right whale, so sayeth the sperm whale hunter. But why might that be? Besides the obvious bias towards the thing that he is more involved with, I think it’s because a sperm whale is slightly more anthropomorphic than a right whale. It has a jaw, it has a massive forehead, the shape of its face is generally more similar to that of a human.

The right whale, meanwhile, has this strange, alien mouth that is designed for filtering water for krill. At first glance, it’s difficult to even understand what is going on with its head, it appears so much to be an extension of its body. In addition, the large, block-like head of a sperm whale appeals to aesthetic notions of minimalism. It is easier to understand at first glance, or at least to make a guess at what you think you are seeing.

Next up is the eyes, which are proportionately tiny, about the same size as those of a horse. Unlike the giant squid, the prey of the sperm whale, they do not need enormous eyeballs, since they spend most of their time on the surface of the ocean, where those would be of no advantage. 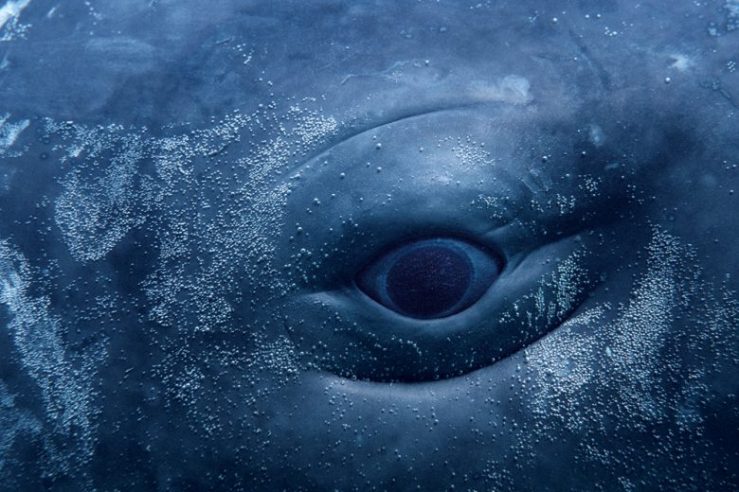 But the size of the eyes is not what Ishmael is interested in. Rather, he wants to talk about how they are positioned on the head. Unlike humans, they are on either side, with absolutely no overlapping vision whatsoever. Whales are entirely incapable of stereo vision, and thus cannot see in 3D. Each eye can only see about 60 degrees, directly on either side of the head, with no vision directly in front or behind.

Ishmael goes off an talks about how this means that they must have more powerful brains, able to perceive two separate images at once, while humans can only process a single image between our two eyes. I don’t really think that’s true, as I find myself, personally, relating more to the sperm whale’s way of perceiving the world.

You see, I have sensitive blue eyes, I sneeze in the sun, and I hate wearing sunglasses, so from a young age I’ve often viewed the world with one eye closed. Through this habit, I have basically trained myself to only look with one eye at a time, at all times, even when it would be possible to comfortably use both. So, I, too, don’t generally have 3D vision, unless I make a conscious effort to use both eyes at once. It’s affected me to the extent that the prescription for my glasses is wildly different for each eye. One is nearsighted and the other farsighted, and I can tell a slight difference in how they see colors.

I’d say that I kind of get two images at once, though they’re not really… active, I guess? In the same way. It’s hard to describe something that you experience so naturally throughout your everyday life. I can definitely see two images, though they are often overlapping in odd ways, if I try to look with both eyes and don’t align them. So, I would argue that the human brain is not necessarily deficient in the way that Ishmael suggests, rather, it is merely that most people don’t use it in the same way. 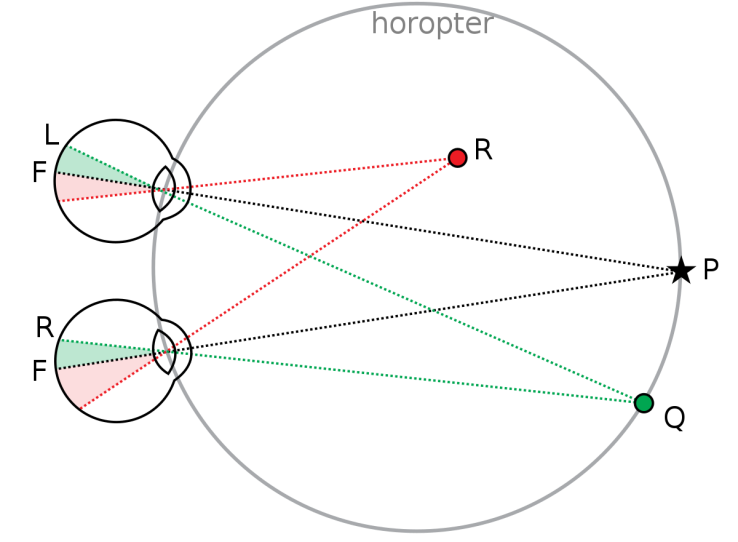 Though, I must admit that it’s still a fair bit different from only seeing on the sides of your body, and never to the front or back. That is some truly alien perception.

Anyway, this split vision is what Ishmael blames for some of the strange, sudden frights and odd moods of whales. Mostly relating to future events, but the idea seems to be that they suddenly perceive something that has been right before one of their eyes because their vision is confused and mixed together in some way.

I’m a bit skeptical, I think they can see perfectly fine, and he’s just anthropomorphizing them a bit much. Whales are wild animals, and predators at that. They are given to seemingly unpredictable and strange behavior from our point of view. It just goes with the territory, there’s no need for some odd explanation for it.

The extent to which whales may recognize whaling boats as threats or not is entirely up in the air. As Ishmael has said before, their panics are just as dangerous, if not moreso, than their intentional attacks. What appears, from the outside, to be some malicious attack, could in fact be a random happenstance.

Consider the story of the first mate of the Jeroboam from a couple chapters ago. We have learned in this very chapter that whales are entirely incapable of seeing directly behind themselves, their field of vision simply does not extend that far. So, what seems to be an intentional murder of the first mate was in fact a random slap of the tail from a frightened animal. All the malice heaped upon the poor head of Moby Dick is nothing more than him being particularly large and energetic.

Although, in a funny way this actually lends credence to the prophetic ravings of Gabriel, and of Ahab. They would say that the seemingly random and wild actions of the physical world are, in fact, orchestrated by some intelligent entity from outside of that realm. The whale swings his tail, smiting a sinner, but is it an accident? All we can say for sure is that it is not the conscious act of the whale himself.

What is Ahab’s true crime? Is it blasphemy, or is it attributing malice where there is naught but dumb animal panic or rage? Or did he commit a crime at all? Is it divine mandate that dooms the Pequod, or is it mere happenstance as well?

One could argue that Moby Dick is actually about the human desire to narrativize experience. To come up with some sort of explanation, and then believe in that more than what was actually experienced, or what would make logical sense. The rules of a satisfying story become the laws of reality, a form of metaphysics based on dramatic stakes and payoff.

In this interpretation, the unseen narrative-weaving entity that Ahab is trying to kill is actually Ishmael, which is a funny thought. It all gets exponentially more complicated when you bring in the meta layer where Ishmael and Ahab are fictional characters twice removed. They are fictional in the context of the book, Moby Dick, which was written by the fictional character Ishmael. Presumably a real Ahab existed in Ishmael’s fictional reality, but who knows if that was really his name, or what he was really like, to such an extent that it is possible for us to guess.

Anyway, whale ears are also very tiny, but there’s one more passage I’d like to talk about:

But far more terrible is it to behold, when fathoms down in the sea, you see some sulky whale, floating there suspended, with his prodigious jaw, some fifteen feet long, hanging straight down at right-angles with his body, for all the world like a ship’s jib-boom. This whale is not dead; he is only dispirited; out of sorts, perhaps; hypochondriac; and so supine, that the hinges of his jaw have relaxed, leaving him there in that ungainly sort of plight, a reproach to all his tribe, who must, no doubt, imprecate lock-jaws upon him.

This behavior has been observed by modern researchers, and they now believe that this is actually how sperm whales go about getting their food. They sit vertically in the water, and when they spot a squid they are able to twist their body around and snap it up with their massive jaw.

Given the position of the whale’s eyes, this makes a lot of sense. To really see what’s going on around you, you’d want to be positioned so that your blind spots were above and below, rather than front and back.

But, really, the hunting habits of the sperm whale are still shrouded in mystery. All that is known is that they eat mostly squid, and especially giant varieties at extreme depths. 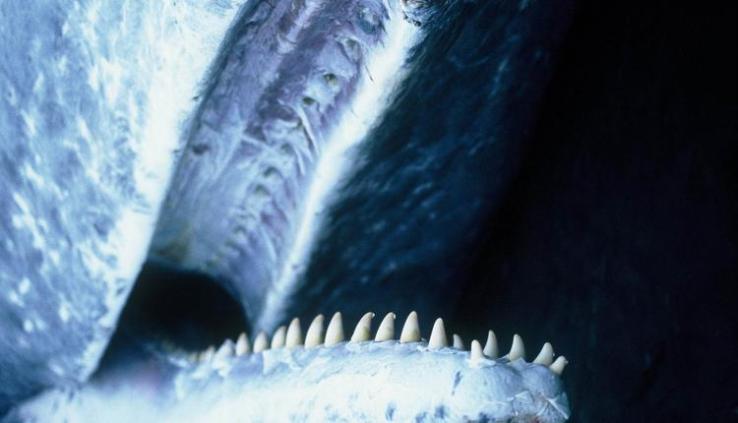 Speaking of, the jaw of the sperm whale is another truly strange feature of its head. They only have one set of teeth, on the lower jaw, with corresponding holes set in their upper gums to receive them, creating a completely sealed mouth when closed. Perfect for tearing apart their slick and cartilaginous prey, nothing caught in those jaws could ever escape. It’s no wonder they’re capable of so easily severing limbs of unfortunate whalers!

Ah, that went some interesting places. That thing about my eyes is really true, by the way. I have to remind myself at times that other people tend to see the world very differently, literally. It’s funny nobody in my family every noticed this quirk, except for my late grandmother.