This is one of the chapters that really inspired me to do this blog. 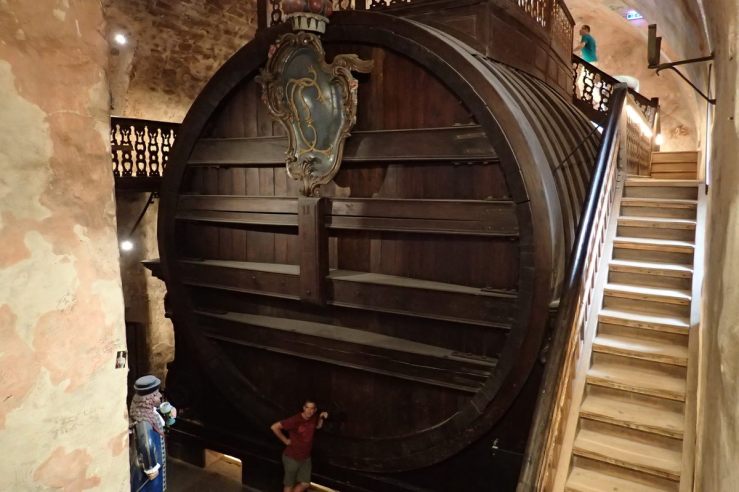 The casual reader of Moby Dick, which I must assume exists because I was one, would come across this and be utterly confused. What the heck is a Heidelburgh Tun, and why is it being talked about like it’s some sort of famous reference that everyone knows? It’s a question that cries out for answering. This is the one that really got me started in on researching all these obscure 19th century references.

SUMMARY: Ishmael describes the internal structure of a sperm whale’s invincible head. It is divided into two sections, each shaped like a quoin (a wedge), one in the front and top, and one below and behind. The lower wedge is filled with a vast web of interconnected bone and cartilage, called the junk. The upper wedge is where the spermaceti is found, which is called the case. The case is divided into two chambers, which hold together about five hundred gallons of spermaceti. This sperm is a strange white, waxy liquid which turns solid as it cools in air, but is utterly slick and smooth and wonderfully fragrant. Ishmael compares the enormous case, usually about twenty-six feet long, to the famous Heidelburgh Tun.

The harpooneer who beheads the whale must be very careful, lest they open this case early and spill its precious contents onto the ocean. It is typically lifted up next to the ship by the beheaded end, so it can be more easily cut into, and its valuable contents bailed out with buckets, as we’ll see in the next chapter.

So: What the heck is a Heidelburgh Tun?

Well, it’s a great big barrel in Hedielberg Castle, Germany. I mean, really big. It was supposedly created to hold wine that was collected as taxes by the lord of the castle, but in reality it has rarely been used to actually hold anything. It’s just a big impressive showpiece, and has fancy decorations and a dancing stage built on top of it nowadays. If it were filled with wine, it would hold about 57,000 gallons, or 219,000 liters.

The Heidelberg Tun is actually one of a series of enormous barrels built at the castle, over the course of a couple hundred years. Perhaps the first was built to hold that tax wine, but after that I suspect it just became a tradition. Building a bigger, better barrel than your predecessor, just to show off how great you were, that sort of thing. Until they landed on a barrel so gigantic it barely even fits in the room it was built in. Truly, you could not reasonably build a larger container for wine. 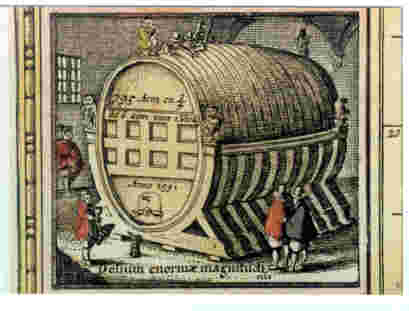 It’s one of those early tourist attractions that are all but forgotten nowadays. It was written about by all kinds of 19th century writers, including Mark Twain, Jules Verne, Victor Hugo, and so on. I’m sure it’s still a famous attraction in Germany, perhaps Europe in general, but it is no quite as famous internationally as it once was. Not really the kind of thing you can just off and use as a point of comparison and assume that all your readers will be able to follow you.

I give the biblical references a pass, because even if you don’t get them it’s safe for Melville to assume that his audience has the proper reference material on hand, but stuff like this is kind of fascinating. It gives a glimpse into a completely different cultural context from our own; one separated not by a mere few decades, but but one hundred and fifty years. Like the sly reference to the “dread goddess at Lais” last chapter, it makes one wonder who Melville thought his audience was, and whether these assumptions about their shared pool of knowledge were on point.

In this modern age, our culture is so fractured, it would be hard for me to throw out references to obscure things that I know about comfortably. Even if something is massively popular, the interpretation of it or the particular part of it that I want to use may not be as widely known. For instance, One Piece is a massively popular manga, but if I were to reference it in an English work, the pool of people who would get it is much smaller, and people who are current or invested in it enough to get the reference may be even smaller.

I suppose one must balance in-jokes and references like this with the nature of the work you’re doing. Not knowing what the Heidelberg Tun is doesn’t really harm your ability to understand this chapter, it just means you’re a little confused as you read it. So long as you’re not encoding key thematic meaning in off-hand references like this, it’s really not that big of a deal.

Anyway, this is all just a way for Ishmael to say that the case of a sperm whale is Very Large, which I think we can all understand now. He calls the shape of it a “quoin”, which is the little wedge that they use to hold up old timey cannons. It’s connected to the word “coin” somehow, but I don’t remember how and cannot be bothered to look it up. If you want to know how coin and quoin are connected, you should go read Neal Stephenson’s Baroque Cycle trilogy of books, I remember it coming up a few times there. Also, they’re good books!

The spermaceti within the case is the reason that sperm whales are hunted. It is the famous “whale oil” which is brought back in barrels, and used to light lamps and lubricate things back on land. The common fat of a right whale may be rendered into a useful substance through a great amount of work, but the sperm of a sperm whale comes out miraculously clean and clear:

Moreover, as that of Heidelburgh was always replenished with the most excellent of the wines of the Rhenish valleys, so the tun of the whale contains by far the most precious of all his oily vintages; namely, the highly-prized spermaceti, in its absolutely pure, limpid, and odoriferous state. Nor is this precious substance found unalloyed in any other part of the creature. Though in life it remains perfectly fluid, yet, upon exposure to the air, after death, it soon begins to concrete; sending forth beautiful crystalline shoots, as when the first thin delicate ice is just forming in water.

In truth, it’s not sperm at all, of course, but a mixture of wax and fat, which is used to enhance the power of the whale’s sonar clicks. Or, at least, that’s the theory.

It really is quite useful stuff, being a good lubricant that burns bright and clear with no smell. It keeps better than traditional whale oil, which is rendered from fat and can go rancid. It’s no wonder that these whalers deliberately chase after such a monstrous creature just to get their hands on it! Of course, nowadays it’s been replaced with any number of other oils that are just as good, and don’t require you to hunt down some sort of enormous angry sea-god. Coconut oil, for instance, has many of the same properties, and is much safer to harvest. Nobody is getting limbs torn off by bull coconut trees.

Sperm oil is actually illegal to sell in modern times, since the sperm whale is an endangered species. But, as I mentioned before, that’s more due to industrialized whaling in the early 20th century than the kind of work Ishmael and co. are doing.

As to the processing and barreling process of sperm on the ship, well, that’s yet to come!

Ah, that was a fun one, just a nice little chapter about the process of processing a sperm whale corpse, nothing weird or philosophical going on.

I mean, I’m sure I could’ve read something deeper into it, but sometimes a tun is just a tun.