You’ll never guess what happens in this chapter.

Yes, finally, at long last, we have a successful hunt for a whale! After so many false starts and missed opportunities, the crew is able to successfully do their job. This, of course, leads into a new little arc for the book, as we learn how a successfully hunted whale is processed at sea.

SUMMARY: On a fine, sultry, enchanted afternoon, everyone on the Pequod is almost asleep, including Ishmael up on top of the main-mast, and the other lookouts. But all of a sudden, a sperm whale emerges from the deep, and then floats lazily just a hundred yards from the ship.

Softly, the boats and lowered and the mates and their crews give quiet chase. Instead of loud oars, they are ordered to paddle with their hands, as to sneak up on the snoozing leviathan. However, it soon notices the boats, and starts to move away, still at a leisurely pace. The oars are dropped, and Stubb’s boat is the closest. Tashtego tosses his harpoon and lands it in the side of the whale, which then dives underwater.

Stubb’s boat is dragged through the water, he is forced to handle the line with his bare hands while it is coiling out, burning them. But they hold on, and stay attached for the entire duration of the whale’s deep sea sojourn. It emerges again, and Stubb begins hurling dart after dart into it, quickly staining the sea red with blood. Eventually, he is able to get up right next to the whale, and stabs a harpoon in deep, hoping to search out its lifeblood. The whale gives one last horrific spasm, and floats dead in the water.

For such an action-filled chapter, there doesn’t seem to be a lot going on thematically, at first glance. It’s more one of those procedural, narrative chapters where its more in Melville’s journalistic mode. “Here’s how this thing I experienced works, isn’t it wild?” sort of a thing.

It’s interesting that the whale simply appears before the ship out of nowhere, when it is least expected. Ishmael even mentions that they were between regular cruising grounds, and the mastheads were manned out of habit rather than expectation of any positive sightings. Only Queequeg was expecting a whale, since they had come across a giant squid so recently, and the presence of one indicates the presence of the other. 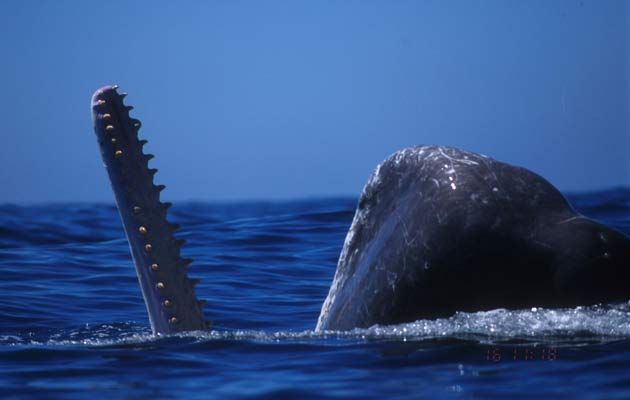 It shows us the power of fate in the form of random coincidence. The ocean is vast, but this hunter and its prey were thrust together out of sheer chance. This is, really, the model that the whole industry operates on, on the most basic level: go out on the ocean and hope you run into some whales. You spend enough time and go to the right parts of the world, and you’ll have a good chance of success, but it’s all just playing statistics.

This sudden appearance of a whale is an outlier, which must always be accounted for, as the whalers well know. Whales are so vanishingly rare that they must be prepared at any time to go hunt them. Rather than simply letting this enchanted afternoon continue, they must give chase to their prey.

I don’t know where I’m going with this.

Anyway, the most striking images in this chapter definitely come towards end, when the whale is in the throes of death:

And now it is struck; for, starting from his trance into that unspeakable thing called his “flurry,” the monster horribly wallowed in his blood, overwrapped himself in impenetrable, mad, boiling spray, so that the imperilled craft, instantly dropping astern, had much ado blindly to struggle out from that phrensied twilight into the clear air of the day.

It brings into reality, again, the truly incredibly size and ferocity of a sperm whale. When this monster roils itself, Stubb’s boat is forced to retreat to a safe distance while it causes a private storm, heaving its own blood to and fro. If they were to stay near, their craft would surely be pulverized in an instant.

Now those epitaphs at the church back in New Bedford make sense. The prey is much more powerful than its hunters, and could destroy them in an instant if it got an opportunity. The men have a long fight, but the whale could end it with one swish of its tail, reducing the boat and its inhabitants to flotsam, or dragging them off beyond the horizon, or beneath the waves.

I have read people reacting to Moby Dick as if it depicts utter barbarity towards whales, that it is nothing but a slaughter. I don’t really see it, myself. It is no different from any other animal that is killed by humans for some sort of resource that we desire from it. At least the whales get a fighting chance, and often claim the lives of their pursuers.

If anything, the tactics of whalers in the hunt call back to the oldest forms of hunting, still practiced by a few scattered tribes in Africa. The great evolutionary advantage of humanity is our long-distance stamina. Pursuit hunting is when an animal is chased until it is too tired to run away, sometimes after being wounded first. A person could simply jog after a gazelle or some other fleet-footed animal, for miles and miles. The prey is eventually too tired to go on, having used up all their energy in a great burst of speed, while the human simply jogs along after it, unstoppable, with their efficient two-legged locomotion.

In the same way, whalers use their ability to stay in one spot, to chase, and to wound to bring down these enormous creatures. Not to sound like an old Vicotrian Britisher, but it seems sporting, somehow.

To my mind, the whaling industry’s reputation for cruelty and mass butchery comes from its later years, in the 20th century. After the invention of exploding harpoons and ships large enough to take a whole whale on board, the industry exploded in productivity. Whales were chased and killed much more efficiently, the practice was, effectively, industrialized at last. No longer a craft practiced by the skilled, but a job that anyone could do.

Yet another example of a fine trade ruined by capitalism and the ceaseless need for productivity and efficiency. In the end, it lead to the death of the industry entirely, as it was no longer necessary and had had its reputation ruined entirely. If the whaler was looked down on in the 1840s, by the 1940s he was an out-and-out villain.

Really, around the time of my childhood (and a little earlier), the whole relationship between humanity and nature had shifted. It has at once grown closer and yet less intimate. People care about the natural world, and experience it… but only at a remove. They do not live in the natural world of their ancestors, nor do they pine for it, but rather for an imagined pure eden that never existed.

Ishmael was wrong when he said the sea was more cruel than the last. All of nature is charnel house covered up with bright colors. The difference in humanity is that we have a choice in how we relate to it. We are able to lie to ourselves, to cast ourselves as heroes, to wish for something better but never to see it achieved.

Ah, but I’ve gotten off track.

Stubb kills the whale. The exact mechanics of the hunt are a little obscure, even now, I think. Tashtego lands the initial harpoon, with the mystical line attached to it. The further darts, the ones that cause the fatal wounds, are thrown by Stubb. These darts are, I believe, smaller harpoons that are also attached to the line. In the flurry of the chase, they are sent down the line and into the body of the whale, causing more wounds near the initial harpoon.

This is why the harpooneer is such a specialized job, but most of the work in the moment is done by the mate. The initial hit must be extremely deep, a fast enough hold to carry the whole boat. But after that, it’s like shooting fish in a barrel, so to speak. This is why the mates are the ones who don’t row, they have to be the ones doing the actual killing.

Ah, feels good to get back to it after such a long break. I’m hoping to get back to a more regular weekly schedule with these posts. I apologize for the gap in coverage here, but hey, it’s a 200-year-old book, so whatever. I’m not in a rush.

Still getting my sea legs again, for sure. I definitely want to delve deeper into this divide between nature and humanity and the way that it has changed in the time since this book was written and today. There’s a lot of interesting stuff to look at there, and I want to bring more concrete examples to it.

But for now, this is enough.