Ah, what a perfect time of year to read this chapter, in particular. 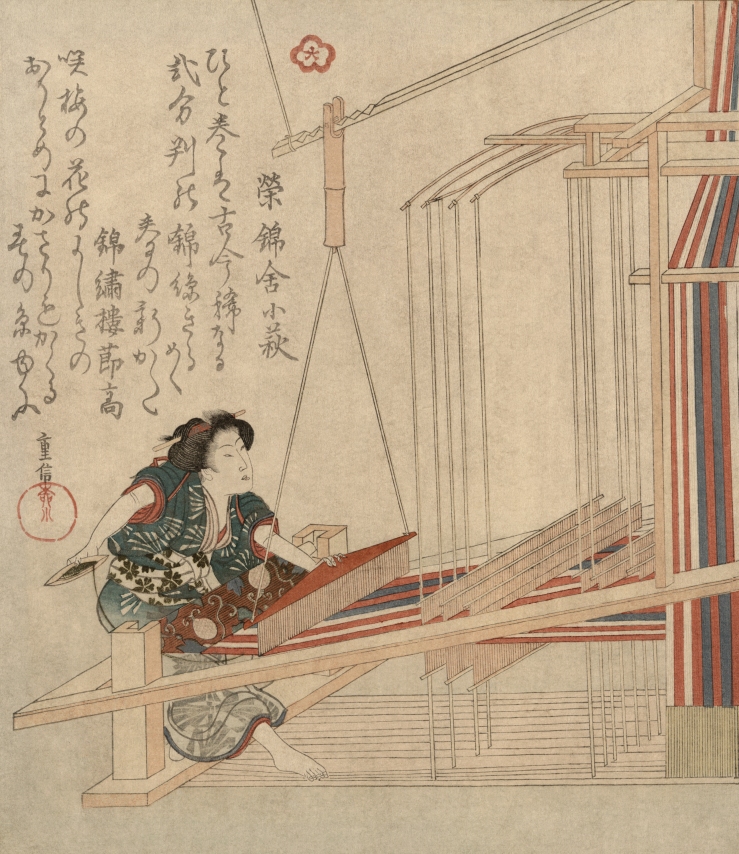 The weather has been much like that described in this chapter, lately. As it is the Pacific Northwest, we have a certain reputation to keep up with regards to sunshine and a lack thereof, but it is still very pleasant in the summer. When the temperature hovers in the low to mid 70s (fahrenheit, of course), and it gets just a little humid, it is just the most seductive and perfect weather imaginable.

SUMMARY: On a warm, cloudy day, some time later, Ishmael and Queequeg are working together to weave a mat for their boat, that they may be more comfortable while rowing. Queequeg works the sword, while Ishmael passes the shuttle between the threads. In a reverie, Ishmael constructs an elaborate metaphor relating the process of weaving to the interaction of fate, free will, and luck.

Suddenly, the spell is broken, as Tashtego spots a group of whales from the mast-head and yells “thar she blows!” Ahab and the crew immediately spring into action, preparing the boats to be lowered, and changing the heading to move in closer.

On the deck, surrounding Ahab, there suddenly appear five mysterious individuals that nobody on the crew has seen before.

This chapter has always been very confusing to me. I mean, I understand the upshot, that it was a nice afternoon and the whole crew was just kind of relaxing, when suddenly they’re on their first whale hunt, but the whole weaving metaphor is beyond me.

Really, it’s simply the fact that I do not understand weaving, or the terminology relating to it. I read this chapter, and it’s talking about Queequeg wielding a sword, and the warp and the weft and what they represent, and I have not the foggiest notion about what any of that means. I know what some of these words mean in other contexts, but the way they’re used here is very confusing.

This time, of course, I just looked it up, and it’s very straightforward. The “warp” are the threads that are held in place vertically, while the “weft” is the thread that is weaved between them horizontally, back and forth, over and over. The “shuttle” that Ishmael wields is a little spindle that holds the weft, allowing it to be passed precisely between the warp. The “sword” is a piece of wood shaped like, well, a sword, and it is the thing that locks the current row of the weave down into place, as part of the larger piece.

So, the metaphor that Ishmael builds is that the loom they’re working at is the Loom of Time, famous of Greek myth, where it was worked by the Fates, who in this case is the role played by Ishmael himself. The warp, the thread that Ishmael is weaving through the weft, is what he calls “necessity”. This is a little difficult to parse, but it seems to be the idea that this is, like, the march of time. The idea that things have to keep happening in succession, pushing events forward. Because if Ishmael stopped weaving, then the whole process would slam to a halt, it would be an interruption, and thus break the spell, and ruin the whole metaphor. But Ishmael has the power to 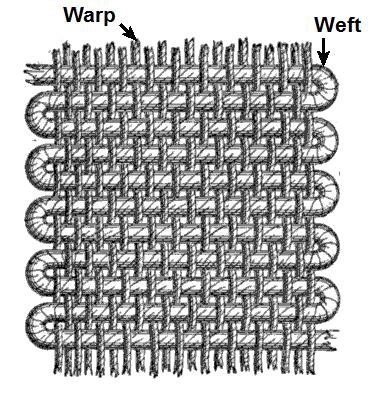 guide this necessity with his own free will, represented by the shuttle with which he lays down the weft. Then, there’s Queequeg, racking the weave down with the sword, only half paying attention, mostly just gazing out at the sea. He represents “chance”. You see, he’s not repeating the strokes of the sword perfectly every time, but with slight variations, sometimes slanted a little, sometimes stronger or weaker. The main point of this metaphor is that the resulting mat, the thing they’re working to produce, is affected by all of these elements coming together, and not one of them in primacy over the others. The necessity, the warp, is always the same, the weft is under Ishmael’s control, and the sword is, really, under nobody’s control, since Queequeg is, as I mentioned before, not really paying attention to it. Thus, we see how this makes a pretty good metaphor, or simile, I can never remember the difference between the two, which one uses like or as and which one just goes ahead without that additional little indication of wordplay, for the progress of time general, as the things that we experience in life are a combination of many different factors, both those that are under our control and those that are not, like chance and necessity. I’m still not quite sure what necessity means, I guess it’s just referring to stuff that has to happen because of the laws of nature or whatever? Like a rock falling when you drop it would be necessity, or the weather would be necessity, any sort of thing that will happen as a result of un-willed action could be filed under necessity I suppose. In the loom metaphor it would be the stuff that we have to work with, so to speak, the basic materials of life as we go along, sort of a representation of the physical world itself perhaps. The conditions that we’re living under could be called “necessity”, which seems to fit pretty well here. Anyway, it was a nice time, Ishmael sitting there on the deck with his husband making a mat for their boat. I’m still not sure what the mat is for, exactly. It just says “for lashing” in the boat, so I assume it’s 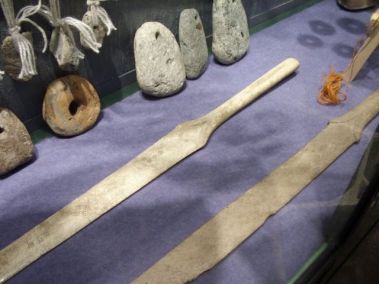 just as a cushion for them to sit on. Man, remember how Ishmael and Queequeg got married back in Nantucket? That was so nice, I’m glad that they were able to find such good companionship. This chapter seems to indicate that they still like to hang out, of a lazy afternoon, which is really nice to see, we get so little of that cute stuff from those early chapters in the rest of the book, it’s kind of a shame. I’d love to hear about just the day to day stuff with the crew and the harpooneers and whatnot. We really only get these basic sketches, and so many books about this era of history, on ships, are all about the military, which is such a different thing. On a whaling ship or a merchant ship, what was it even like? This book has a bunch of sort of stuff you can infer, but doesn’t give is that deep dive that I’d really want. You know, into how the crew gets along, decides who is gonna do what, how they entertain themselves, that sort of thing. I suppose, again, you can kinda infer from that chapter that was like a full-on stage play what they usually get up, but that was a special occasion, y’know,  not the everyday thing, or everynight I guess. Since we’re getting so much deep insight into Ahab, it would be nice to get such a deep dive into the crew, so as not to succumb to sort of a Great Men of History sort of thing with only focusing on the people who are in charge, even though they may not actually have that much affect on the outcome of the whole enterprise, like how in War and Peace there’s this huge tangent about how Napoleon didn’t really have much say in how this one battle that he was famous for winning was actually won. Of course in this case, it’s fiction, so Melville, or Ishmael, can swing events however he wants to make Ahab seem more important, and lord knows we’ve had enough of tha-

“On the lee-beam, about two miles off! a school of them!”

Instantly all was commotion.

And with that, we’re off to the races. They get the boats ready to launch from the cranes, they start turning the ship, everyone is shaken from their reverie in an instant. It’s time to make some money! 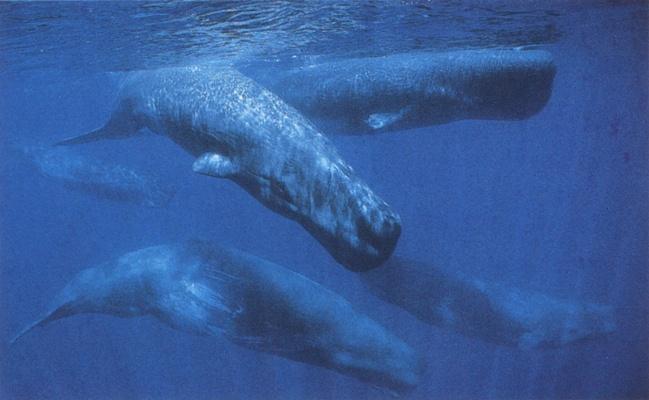 One detail that’s interesting is how they are able to determine what kind of whale it is. Sperm whales, apparently, spout at a very particular interval, like clockwork, when they’re on the surface. After all, these whalers aren’t after right whales or any other kind, but it can be hard to distinguish when they’re still more than a mile off. Just look like black lumps on the water.

And then! Then! We finally meet our stowaways!

But at this critical instant a sudden exclamation was heard that took every eye from the whale. With a start all glared at dark Ahab, who was surrounded by five dusky phantoms that seemed fresh formed out of air.

Yes, we see some mysterious “dusky” phantoms (yikes). We’ll learn a bit more about them in the coming chapters, but it seems that Ahab intends to go out and make single combat with the whale, so has brought his own secret boat crew along to help.

I mean, this isn’t too much of a spoiler, as one of the most famous things about Moby Dick is how Ahab dies at the end. Although, even the details of that aren’t really reliably transmitted, it’s only the speech that most people know, probably because it was in that Star Trek movie.

Sometimes, it’s fun to imitate the mood of a chapter, just as a little writing exercise. As I mentioned up top, the weather here in Seattle has also been rather pleasant and seductive lately, so it was easy to tap into.

Now get ready for some whaling action!!