Okay, let’s get back into it with a nice, meaty chapter. We’re getting into some interesting metatexutal territory here, blurring the line between Melville and Ishmael. 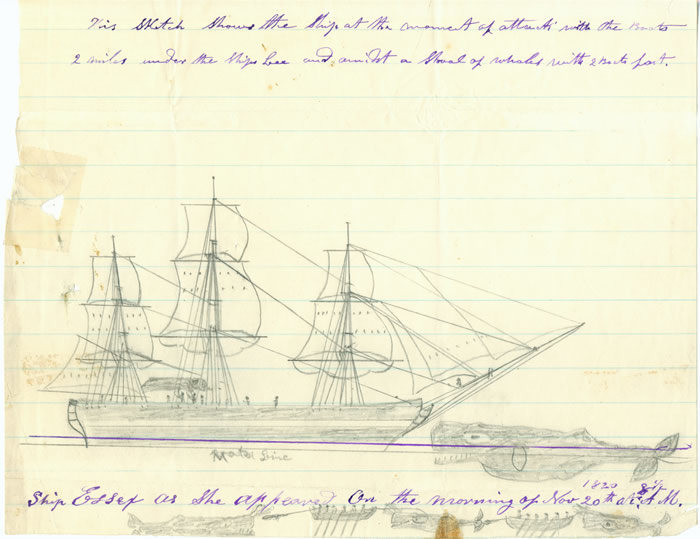 Technically, I think this whole thing is just more of Old Ishmael, based on the general tone and tendency towards exhortation and exclamation. But it’s also very much a bibliography slipped into the text itself, and I must say it’s more pleasant to read than the ones you usually see!

SUMMARY: Ishmael assures the reader that the events of this book are plausible. He cites books, legal documents, and his own personal experience. First, that whales can survive being hunted to be finally killed years later, with the harpoons still stuck in their hides. Second, that sperm whales can and have sunk whole whaling ships before, not just smashing the smaller boats. Third, that there have been famous whales that were known to be dangerous, and systematically hunted by whalers in order to secure the safety of their peers. Lastly, that whales are, in general, very dangerous to ships, in any profession, having been mistaken for reefs and the source for tales of sea monsters in the ancient world.

As you’d expect from the title, this chapter takes on a very legalistic and precise tone. Something that Melville has been known to adopt from time to time in his maritime prose, but I suppose the most famous example, Benito Cereno, actually came several years after Moby Dick.

For those not in the know, “affidavit” is literally (medieval) Latin for “he has declared under oath”. Generally, it’s a written statement that is given freely and under oath to some sort of legal authority, to be presented in court as evidence. Nowadays, these are not generally used very often, as eyewitness testimony is shaky at the best of times and courts really prefer having the witness available to be cross-examined.

But, for the purpose of this chapter, it’s a perfect title. Ishmael, or perhaps Melville, wants to go on the record and assure the reader that all this shit is real. This is not some sort of dreamlike fable, some sort of magical realist fantasy, some of fairy tale, where it’s all a bunch of nonsense bullshit that he made up to get across some sort of point. No, sperm whales are real, and they are big, and they are dangerous, and that is, in itself, terrifying.

Take it from this, one of my favorite lines in the whole book:

So ignorant are most landsmen of some of the plainest and most palpable wonders of the world, that without some hints touching the plain facts, historical and otherwise, of the fishery, they might scout at Moby Dick as a monstrous fable, or still worse and more detestable, a hideous and intolerable allegory.

Which is very instructive in figuring out a proper reading of this book, I think. Moby Dick is, at the end of the day, just a big ol’ angry whale swimmin’ around in the ocean. That’s it and that’s all. All the self-referential talk about the symbolism of his whiteness and the way that Ahab has built him up to be the symbol of all evil in the world or of a pitiless God or as the earthly representation of the malign forces of fate operating behind the veil, that’s all just things that the characters in the story are thinking. It is instructive to their personality an journey, but not to any sort of reality.

So, what this chapter really is is kind of a reality check. Yes, it’s all well and good to talk about the strange supernatural feeling of a white whale, what the concept says to you in abstract, but the cold hard fact is that whales are real and will kill you dead given half a chance. Understanding them is not simply a matter of sitting around thinking about the strange power that people tell tales of, but rather grappling with the actual, physical reality of them.

We are going to get some chapters later on that are rather dry, but get into this project on a very deep, nitty-gritty level. Ishmael is going to take us through the strange skeleton that sperm whales have, the finer points of their whole anatomy, along with the way they have been viewed by different ancient cultures over the years.

Melville doesn’t want us to get lost in this philosophical talk about Moby Dick. It’s all well and good to say that Ahab is crazy for wanting to get revenge on a dumb animal, but it’s also crazy because it’s suicidal. The fact is, people die in the whale fishery all the time, and certain famous whales are often the culprit. There have been, in real life, whales that were known to be especially dangerous, and avoided at all costs by whalers, until they were systematically hunted down.

The tale of Ahab and Moby Dick is not an allegory, a mere invention intended to teach a moral lesson, but rather a story based on reality. Ishmael even goes so far as to spoil what happens at the end of this book by telling us about the Essex, a real-ass whaling ship that was actually sunk by a whale. There were two books written about it, one by the first mate (Narrative of the Most Extraordinary and Distressing Shipwreck of the Whale-Ship Essex) and one by the cabin boy (The Loss of the Ship “Essex” Sunk by a Whale and the Ordeal of the Crew in Open Boats). Melville was inspired by the former, as the latter was not written for some twenty years after Moby Dick.

Ishmael relates this,and also his own experience talking to old whalers in Nantucket about their own adventures. This is another bit that is almost certainly direct from Melville, only given a gloss of fiction with Old Ishmael’s tone.

One little paragraph really stood out to me in this chapter, and had me thinking about modern capitalism and industry. In it, Ishmael relates how most landsmen don’t have a proper conception of how dangerous the whale fishery is, because all the death and carnage is literally physically distant. It was hard to get word about a terrible accident where men were killed back to people in Nantucket from a boat off the coast of New Zealand.

Remember, this is all in pursuit of oil used in lamps, a very common and everyday product that people used all over the world. It’s not some weird luxury item that was only being hunted to serve a small clienetelle of the very rich, it was just another type of lamp oil.

So, there’s this fundamental disconnect between the way a product is produced and how it is popularly conceived. Like, yes, people have a vague idea that it comes from whales, and that whales are like big cows that live in the ocean. Presumably you stick them with something sharp and the oil comes out, it doesn’t sound particularly perilous. It’s not like anyone you know has been killed in the course of fighting a sperm whale, after all.

This type of disconnect between a consumer good and the process of its creation is, if anything, far more common nowadays than it was in the 1850s. But it was being written about back then because it was still a novelty. It is, essentially, a product of colonialism and industrialism. The focus is shifted from direct interaction with the person who makes a thing, or at least someone who knows who made it, to several degrees removed. Now there are just… products. Things that you can get, and who cares where they came from or how.

As opposed to a more traditional model whereby you would deal directly with a craftsperson, or someone who had dealt with them directly. If you wanted meat, you went to a butcher, where you saw the blood and guts in addition to the choice cuts. The labor was right out there in the open, to be viewed and normalized.

For God’s sake, be economical with your lamps and candles! not a gallon you burn, but at least one drop of man’s blood was spilled for it.

To get back to the example in the text, the people using whale oil are not aware of just how many lives are sacrificed so that they may have a light to read by. The cost of the commodity is hidden from view, because the practice of getting it takes place thousands of miles away.

Think, friend! How many gallons of human blood have soaked your smartphone, before you ever held it? How much human misery was necessary to cause those materials to come together in that configuration?

This abstraction has been heightened and weaponized. It is important to keep people from realizing the true cost of all the splendor that they see before them. No matter the monetary cost, if the cost in human life is too high, people are not going to want to pay. This also goes to the practice of dehumanizing the foreigner, the outsider, saying that their suffering is somehow different from ours. It’s all to persuade you that it’s okay to accept that horrible things happen in the production of these goods, as long as it’s abstract enough. It’s happening far away, to nobody you know, who don’t speak your language, and don’t think like you.

I suppose, then, what I’m arguing is that Moby Dick is a revolutionary socialist text, trying to close the gap between workers and the consumers of their labor. By bringing you the inner, tormented life of a whaling captain who has been physically and mentally crippled by his work, we can understand the extreme conditions under which they operate in general. All this in pursuit of profits for those back on shore! Why should the lion’s share of the money go to those who do not risk life and limb aboard the boats, battling giant monsters to steal their very life’s blood?

This is what it means that Moby Dick, both the whale and the book, is not an allegory. It’s about an industry with real people in, who at the time of production were consider the worst, least reputable sorts. This is why Ishmael is so passionate about defending their reputation, and about assuring the reader that all of this is, in fact, very plausible.

So, there you have it. My fundamental reading of what Moby Dick represents, for my high school english class paper: he’s a whale.

Soon, we’ll be coming up on the first actual whale hunt! That’s gonna be fun, get some real action goin’ on again.