So, now that we’ve checked in on the officer class of the ship (minus Flask, who barely counts), it’s time to see how the rest of the crew is reacting. Since so few of them are actual, established, important characters, they don’t get whole individual chapters, not even the harpooneers. 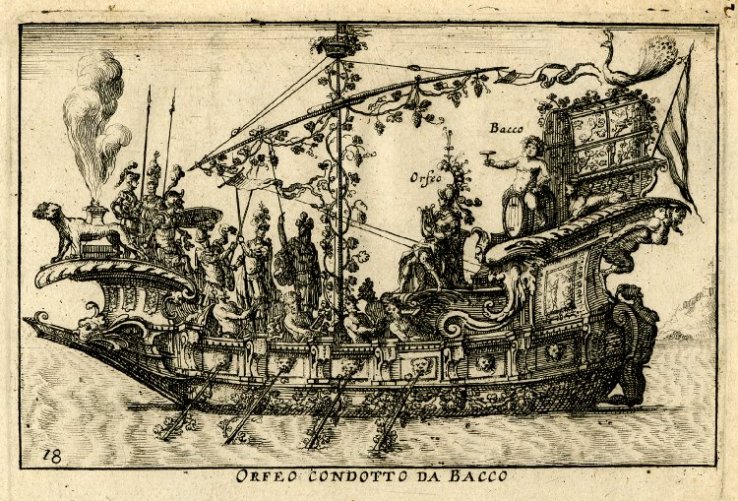 But, what they do get is a fun format change! This chapter is written entirely in the style of a stage play. I’ve never heard of it being staged, but I wouldn’t doubt that some high school or college that was particularly arts-oriented has done it once or twice.

SUMMARY: The crew sing songs in the forecastle to celebrate their new purpose. They call for Pip, a young black cabin boy, to play his tambourine for them. As the watch changes over, the crew dance for a while, but are soon tired out. In general, the crew are all enthusiastic about following the captain’s wishes and killing Moby Dick. A Spanish sailor taunts the African harpooneer, Daggoo, and they almost get into a fight, but it is called off to deal with a sudden storm. Pip cowers before the barely contained violence, and the rage of the storm, asking God to take pity on him.

Hoo boy, this chapter has a lot in it. Although, it doesn’t really have as much like deep philosophical or spiritual meaning as the last few, at least on the surface. It’s a fun chapter to read, starting off with everyone singing a classic sea shanty, and goes much faster than some of the dense, confusing chapters we’ve had lately.

The writing in this chapter is… odd. I guess it’s supposed to be theatrical, I didn’t check if it was in iambic pentameter or anything, but it certainly feels a bit forced and artificial. That aspect does feel intentional, though. The crew members, this background cast of characters that are always around and yet indistinct, are denoted by their nationality, which also gives them their one, singular quirk.

For example, the Icelandic sailor mentions in his only line of dialog that he is used to ice floors and doesn’t like these springy wood floors they have on this ship. The Dutch sailor randomly mentions Amsterdam butter. The Chinese sailor says “make a pagoda of thyself”. And so on, and so forth, for the French, Maltese, Sicilian, Long Islander, Danish, Portuguese, Tahitian, Lascar (Indian), English, Irish, St. Jago (Jamaica), and Spanish sailors. The twist is that the Spanish sailor’s national quirk is that he’s racist!

SPANISH SAILOR. (Aside.) He wants to bully, ah!—the old grudge makes me touchy (Advancing.) Aye, harpooneer, thy race is the undeniable dark side of mankind—devilish dark at that. No offence.

On the balance, I am really very glad that Melville decided not to write phonetic accents for all these various nationalities, but it is still odd to have them all written with exactly the same… voice, so to speak. It is fitting, thematically, since these are all just part of the sort of mass of bodies that is The Crew, and not really characters in their own right, unlike the harpooneers and maybe the Old Manx Sailor, who gets a few more lines in this chapter. Going through and writing them all in a unique way would be a waste of time, they only ever get one line.

Even when Melville wants to have more lines for sailors from Nantucket, he just has them be different sailors. By the end of the chapter, we get a line from 5TH NANTUCKET SAILOR instead of building up a new character. In truth, the whaling voyage that Melville went on was mostly Americans with a few Brits thrown in, but he must have heard stories about how international whaling crews could be, thus the incredible variety here.

Also, it’s fiction, and it’s fun to exaggerate. It’s interesting how 19th century authors and critics were often so obsessed with stories being realistic. That’s why epistolary novels were so beloved, and old Gothic fiction and overtly supernatural stuff was looked down on, put in a low-class drawer all on its own, as it is even to this day. I mentioned early on in this blog about epistolary novels, and how Moby Dick was kind of a variation on that. But this focus on realism shows up in other places too, like how Ishmael goes into detail about the real incident of a whaling ship being sunk by a whale.

When I read a book, I’m not really paying particularly close attention to whether the events of it could literally happen in real life, or not. But that was apparently a large part of the appeal. Novels were still a relatively young art form, and realistic epistolary novels would be like getting an inside view on some scandal out of the newspaper. A lot of novelists started out as reporters back then, like Charles Dickens or Gaston Leroux, the author of The Phantom of the Opera. It’s funny how taste influences the text of novels, in this way. Moby Dick was criticized at the time of publication for being too unbelievable, which really strikes me as massively missing the point.

Anyway, we do get a couple little moments with established characters in this chapter. Tashtego, the Native American harpooneer, sits aloof and calmly smokes his pipe rather than join in the festivities. Unlike Queequeg, he isn’t interested in assimilating at all to these strange activities that white people like to engage in. The Old Manx Sailor continues to be the old wise man character of this book, who also realizes the doom they’ve put themselves under:

OLD MANX SAILOR. I wonder whether those jolly lads bethink them of what they are dancing over. I’ll dance over your grave, I will—that’s the bitterest threat of your night-women, that beat head-winds round corners. O Christ! to think of the green navies and the green-skulled crews! Well, well; belike the whole world’s a ball, as you scholars have it; and so ’tis right to make one ballroom of it. Dance on, lads, you’re young; I was once.

The way the fight breaks out, and is only narrowly averted by an emergency, feels like a very real event, in this mostly artificial chapter. It comes as a bit of a shock, frankly, in the middle of everyone getting along so well, lubricated as they are by the captain’s special stipend of grog.

It raises the specter of the, shall we say, unfortunate racial politics of Moby Dick. Especially with the introduction of Pip, the young black child who is on this boat for some reason and is made to perform for the crew with his tambourine. Pip will go on to be a weirdly major character in the rest of this book, and have a lot of interesting characterization and symbolism built up around him. But boy oh boy is this not a good introduction.

I mean, it’s important to remember that this is all being written by a white man in pre-Civil War America, so the racial politics were never going to be great, but yeesh:

Oh, thou big white God aloft there somewhere in yon darkness, have mercy on this small black boy down here; preserve him from all men that have no bowels to feel fear!

At least we haven’t gotten to the character with That Phonetic Accent That All Black Characters Had Back Then yet. I dunno what I’m gonna say about that. Suffice it to say, there’s some rough stuff here, and to come.

Ah, I suppose it’s my instinct to shy away from talking about these things too deeply as I myself am white and feel embarrassed about the whole thing. The edifice of cultural racism has no doubt benefited me in countless small ways throughout my life, and will continue to do so. There’s not much I can do about it, nor anyone else. These seeds were planted long ago, and it will take many more years of work to uproot them.

It is good to remember, though, that this is not any sort of natural state of humanity. There is an origin of racism, and you can track it down in academia. The justifications built up for chattel slavery and colonialism are sunk deep into our culture, but they still have to be taught. It only goes back a few hundred years, not a hundred thousand.

All you can do is think on it, and monitor your own biases and behaviors. Not only when it comes to race directly, but any time you deal with people different from yourself, any time a story is being told about “civilization” and “progress”.

In an interesting way, this ties back in with a theme in Moby Dick: The problem of other minds and the impossibility of knowledge. Nobody can know what Ahab is really thinking, how cleverly he’s really going about this, Starbuck just thinks he’s gone mad. Ahab doesn’t know what Starbuck is thinking, how he really responded to the speech, only that he didn’t continue to fight back. Both have an imperfect picture of one another, and cannot access each others interior world.

This mirrors the way that Ishmael cannot truly capture the essential nature of the whale, what it is like to experience them physically, through this book. Even with all his careful research and exhaustive taxonomies, he doesn’t begin to complete the picture. True, actual knowledge of what whales are like is something that is impossible to attain. In the same way, the story of the Pequod and what really happened is impossible to know, but he will do his best to provide an explanation, as vague and directionless as it may be.

The crew in this chapter represent the more popular response to the insanity and impenetrability of the world: just have fun and get on with it. Not quite to the extreme of Stubb laughing in the face of doom, but just as a general sort of congeniality. Keep your pride, respond to danger, but don’t worry about things above your station. All that high metaphysical talk that Ahab shared with Starbuck is above their pay grade.

Whew, that was a fun one. Got into some more deep issues than I thought I would. Gonna have to really do an even deeper dive on the history of racism and colonialism and whatnot… another day.