This book is going to continue being a bit strange, playing with the form of the novel in some interesting ways. Just recently we had chapter titles repeating, and here we have one that’s a set of stage directions. 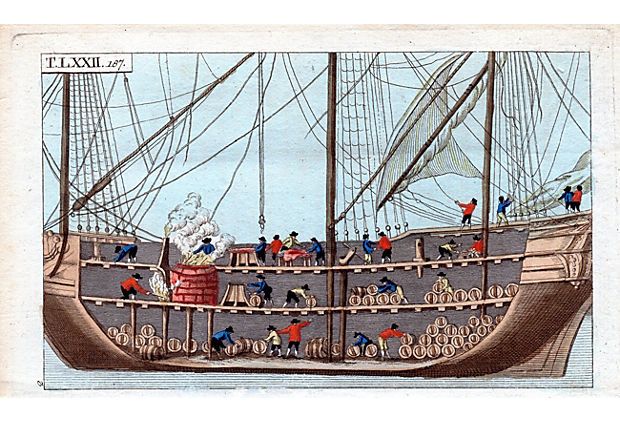 It brings to mind the way that some books have a little summary of what happens in the chapter in the table of contents. “In which such and such does so and so and meets with what’s-her-name”, you know the type.

SUMMARY: The weather is now so pleasant that Ahab spends almost all his time on the deck. At night, he takes care not to pace around, lest he disturb the sailors sleeping directly below his feet. But one night, he is distracted by his thoughts and forgets himself, going clomping around very noisily. Stubb is awoken, and goes up to tell the captain to keep it down. Ahab apologizes, but also rebukes Stubb, who tries to talk back but is terrified and runs away when the old captain turns and charges at him. Back below deck, Stubb reflects on how strange his new captain is.

There are some interesting inferences to be made in this chapter. One that was a little surprising to me, was that this is the first time that Ahab has gone on a whaling trip with these particular officers. Stubb has never worked with him before, and doesn’t know what he’s like.

One would think that you would keep together at least the highest functioning, more managerial parts of a ship’s crew, but apparently not. I suppose it makes sense, they’re not in the navy, it’s just a job. All these sailors are freelancers, coming and going from one ship to another as they please, not tied down to any particular one. No wonder Ahab has to get by so much on reputation, with the crew shifting under him all the time. And no wonder Ishmael and Queequeg had to prove themselves when they sought to sign up!

The part about having to be quiet at night on a ship is also interesting. Just a little bit of nautical etiquette that’s been forgotten over the years, but makes a lot of sense. There have to be people up on the deck at all hours of the day, but there aren’t as many at night, and they don’t want to disturb the people sleeping just a few inches away. In an enclosed space like a sailing ship, especially one on such a long, long voyage as whalers go on, it pays dividends to be considerate of your fellow sailor.

We get another emphasis on Ahab’s age here, as we had last chapter. It’s funny, that aspect of his character never struck me as particularly central, but it really does inform a lot of his behavior. In this case, he doesn’t sleep much, as many old people don’t. The explanation we get is that he feels like going down into his grave when he descends to his cabin.

There are a couple of metaphors like that, relating some experience to the fear of death, which must be ever-present on a ship like this:

“It feels like going down into one’s tomb,”—he would mutter to himself—“for an old captain like me to be descending this narrow scuttle, to go to my grave-dug berth.”

[…];because to his wearied mates, seeking repose within six inches of his ivory heel, such would have been the reverberating crack and din of that bony step, that their dreams would have been on the crunching teeth of sharks.

Then, we get to the incident described in the title of this chapter, when Stubb is disturbed by Ahab’s nocturnal pacing across the deck, and goes up to confront him. The big takeaways here are that Ahab is tormented over something, which we’ve had an inkling of, and that Stubb doesn’t take insults lightly, but is also capable of taking anything in stride.

“Then be called ten times a donkey, and a mule, and an ass, and begone, or I’ll clear the world of thee!”

As he said this, Ahab advanced upon him with such overbearing terrors in his aspect, that Stubb involuntarily retreated.

The way that Ahab’s voice is written is very interesting to me. This seems to be where most of the Shakespearean influence in this book goes, he really does channel the immortal bard any time he opens his mouth. All adding more and more to his strange, mythical characterization. He’s got the thees and thous of the Quakers, as you’d expect, but also a bit of something else, too.

This chapter, after that last bit I quoted, is all one big paragraph, which is a monologue from Stubb, to himself. We get a handful of these throughout the book, and they’re all delightful. He rambles on and on, in a very realistic way, reflecting on the strange* behaviors and stranger things he’s heard about his new captain. He doesn’t sleep at nights, he goes down to the hold for mysterious reasons, he leaves his bedclothes hot as an oven and all twisted up in the morning.

But, in the end, Stubb just lets it go, and goes to sleep. Which fits very well with the description of him that we get in Knights and Squires, he’s not the type to fret about things. Who hasn’t been there? Received some insult or experienced something shocking, spent a few minutes worrying over it, and then just decided to leave well enough alone. And yet, the vague sense of injury lingers for days and weeks. Unresolved tension can be a very irritating thing.

Think not, is my eleventh commandment; and sleep when you can, is my twelfth—So here goes again.

So, here is our first time that Ahab interacts with anyone on the crew, his very first lines, and they are inviting conflict and tension. Already, Melville is laying the foundations for the eventual greater conflicts between Ahab and his officers. That’s some good foreshadowing.

In a lot of depictions, Ahab’s motivations and actions get reduced down to simply going off to get revenge, in a clear and upfront sort of way. But we see that he is tortured over it, and he doesn’t lead with it. He doesn’t give a rousing speech as the ship leaves port, that they’re all going to get revenge for his leg. It’s just an ordinary whaling voyage, so far. Another job; a dangerous job, but in the end just an opportunity to make a bit of money.

The omens of Ahab’s secret purpose are obvious to anyone who knows anything about Moby Dick, but not to the crew. It makes for some dramatic irony for us, the 21st century readers, but it’s hard to say if that was the original intent. Such is always the problem with famous works of art, all their secrets are exposed by their notoriety.

Old Ishmael has made no great secret about the tragic fate of the Pequod, alluding to it even through its name. But the specifics, why it is that the ship was doomed, and how that connects to Ahab and his missing leg, that part has yet to be explored at all. It’s all just mystery and darkness, thus far.

One thing I want to make note of, that I forgot to bring up last time, is to call attention to the color white. It’s all over Ahab, he has his white leg and his white scar and his “bleached bone” brows that terrify Stubb. This is gonna be a big Thematic Thing as we go forward, in a surprisingly explicit way… but for another subject. Just keep it in mind, that Ahab is marked with the color of his adversary.

That one went surprisingly fast, but I suppose it’s all more setup. This chapter has some great prose, I wish I could quote all of Stubb’s rambling monologue but it’s just too long.

Next time is another tiny, tiny chapter! That’ll be fun.

*: The word Stubb actually uses, over and over again, is queer.

Damn me, it’s worth a fellow’s while to be born into the world, if only to fall right asleep. And now that I think of it, that’s about the first thing babies do, and that’s a sort of queer, too. Damn me, but all things are queer, come to think of ’em.