Let us continue the Theology lessons, here in this, the most churchy run of chapters in Moby-Dick; or, the Whale. 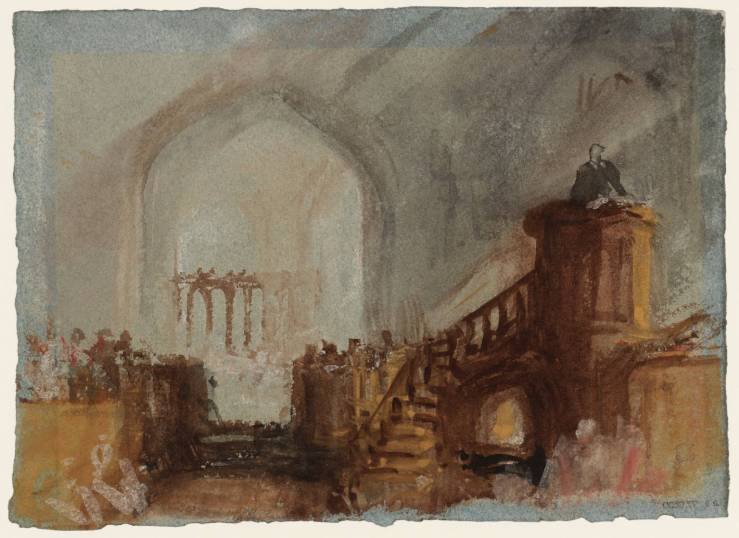 This chapter contains some real meat in that particular vein, as well as appealing to a particular style of Christian aesthetic that I enjoy a great deal. After the doubts raised in The Chapel, it’s time to get a little more sincere, as the chaplain finally makes his appearance.

SUMMARY: Father Mapple, the chaplain, arrives. Having walked through the icy storm, his heartiness and humbleness cannot be doubted. He takes off his hat, coat, and overshoes, and ascends the pulpit to conduct the service.

It’s funny, sometimes, when I condense down what actually happens in a given chapter into a mere three sentences, and then have to go on for a thousand or two words about all the rest of it. Such is the way with novels! Especially the more twisty, philosophical ones like Moby Dick.

It seems to me that there is something of a tonal shift when Father Mapple arrives on the scene. Ishmael has a certain affection for the man, noting his humbleness, his robustness, his true, solemn devotion to his faith, all throughout this chapter and the next. We are assured that Mapple is himself a former seaman, and that he comes by his eccentricities honestly. Even the ropes of the pulpit are the genuine article, donated from a real ship.

Indeed, Ishmael is convinced that all of this is a part of some sort of clever Metaphor or Allegory being subtly employed by Father Mapple. When the chaplain pulls the rope ladder up into the pulpit, rung by rung, Ishmael waxes philosophic again:

I pondered some time without fully comprehending the reason for this. Father Mapple enjoyed such a wide reputation for sincerity and sanctity, that I could not suspect him of courting notoriety by any mere tricks of the stage. No, thought I, there must be some sober reason for this thing; furthermore, it must symbolize something unseen. 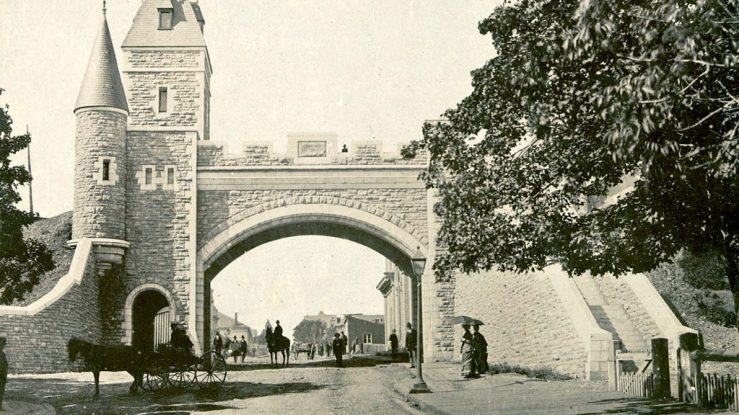 Around this time, he also makes a couple of stray references I thought I should chase down. First, the pulpit is Mapple’s own impregnable “little Quebec”. Quebec City is famously a walled town, and indeed is the only north american town that still retains its walls to this very day!

The other is that the pulpit is “ a lofty Ehrenbreitstein, with a perennial well of water within the walls”. Turns out, that’s just a enormous fortress in Germany, near what would at the time have been the border with France, right on the banks of the Rhine river. It was destroyed by the French during the Napoleonic wars, but then rebuilt even stronger afterwards. At the time of this writing, it would be a massive, impressive symbol of military might and safety. It, too, has survived to this very day, and you can go tour it in much the same form as it was in Melville’s day. As far as I can find, there are no legends about it having a replenishing well within its walls.

This is all in service of the Metaphor that Ishmael mentioned, that this heavenly retreat of Father Mapple signifies his withdrawal from petty physical concerns and turning his attention to the spiritual.

Yes, for replenished with the meat and wine of the word, to the faithful man of God, this pulpit, I see, is a self-containing stronghold

I love this kinda shit. I’m gonna be honest, this sort of… I’m not sure exactly how to describe it, early American naive Christianity. The kind of thing you get from puritans and other wild strands of the faith that were exiled first to Holland and then across the ocean to the New World.

It’s like… people discovering Christianity for the first time and trying to make sense of it on their own. Protestantism flows from the invention of the printing press, and the new availability of the actual text of the Bible to people other than Catholic priests and monks. What must they think of these strange stories, now thrown open for interpretation? Trying to discover the inerrant truths hidden within them, seeking a way of life in a book written thousands of years earlier, for a completely different audience. 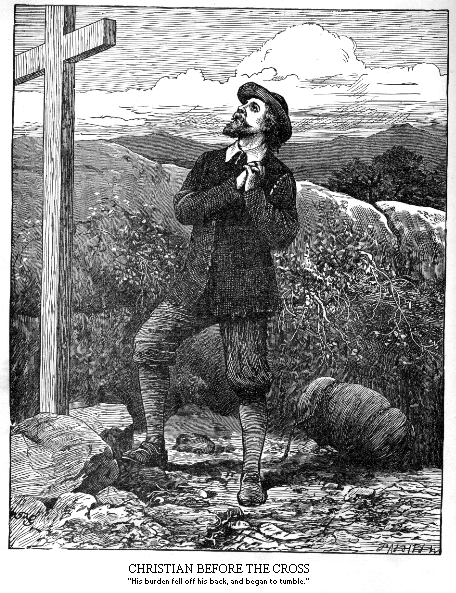 It leads to things like Pilgrim’s Progress, a book massively popular in very early New England. Just directly telling people to be good, that greed is bad, and you just have to believe in Jesus. The burden of discovering the truth through the scripture is a heavy one, why not make a cheat sheet? Here’s all the important stuff, laid out in the most bald, easy-to-understand allegory that even the youngest of children or the busiest of farmers could understand it. When you tear down an old idol that was telling you how to run your life, you have to fill that void with something!

This kind of Christianity, with it’s very simple, direct messages trying to convince people not to be so horrible all the time, appeals to me on a deep level. It feels so damn honest compared to its modern American successors, I suppose. Just be good, and not bad, and believe in The Lord and it’ll all be okay.

Of course, the truth is that even back then this kind of ministry was rife with hypocrites and scandal. But that’s more Nathaniel Hawthorne’s territory, we’re reading a Melville book, and though they were close friends, they didn’t exactly speak about the same things all the time. 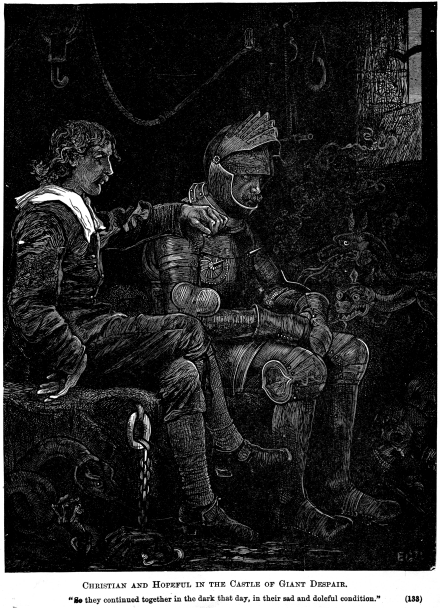 Speaking of the book that I’m supposed to be talking about, the metaphor is completed by Ishmael saying that the pulpit is like the prow of a ship, but for the whole of the Earth. It is the foremost part, sticking out bravely, leading the way for all the rest of us.

I would be remiss if I didn’t mention one other thing: another enormous, portentous oil painting! This time hanging on the wall directly behind the pulpit, above the tragic tablets on the back wall. It depicts a ship in the midst of a storm, but with a ray of sunshine breaking through the clouds above. And in that, an angelic figure beckoning the ship onwards, to safety. 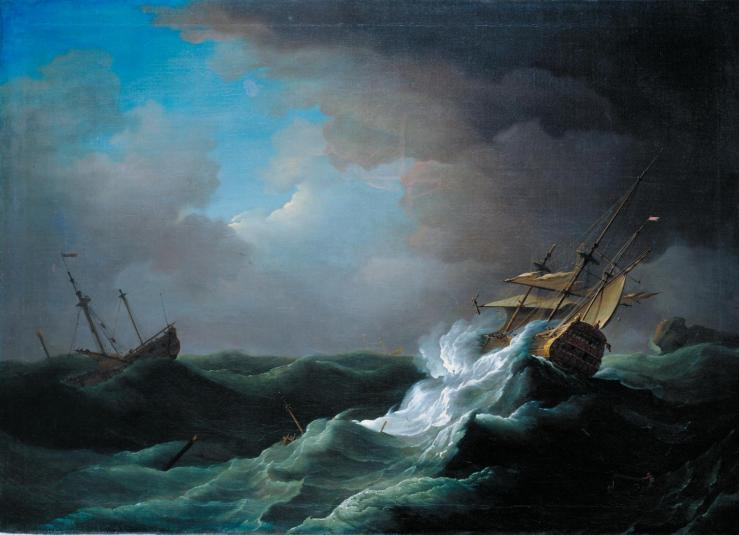 And so the structure of these chapters has gone. First, we were plunged into grief and theological doubt by the tablets, then we climb out of that mire with Father Mapple, to the top of the high pulpit. And finally, next chapter, we shall ascend into hope and light when he finally begins his sermon.

You’ll never guess what book of the bible he’s talking about.

Whew, that one really went some places. I think part of my appreciation for that vein of Christianity comes from the church I grew up in, UCC, which a descendant of Congregationalists, which have their origins among the dissidents of England and the settlers of New England. Also the exceedingly lengthy, yet very good, series of books from Neal Stephenson called The Baroque Cycle, which I highly recommend.

As always, you can follow along for free with the full text of the book from Gutenberg dot org. Next chapter is gonna be realllllll long and even more Theological than this one, as we get into an actual got damb sermon, probably based on one that Melville actually heard at the real church that this scene is set in. We’ll see how it fits in, thematically, with the rest of the book.

A Sermon From The High Pulpit: The Chancel Behind (1827), Joesph Mallord William Turner.

Bunyan’s Pilgrim’s Progress, With Over One Hundred Illustrations Designed by Frederick Barnard and Others, Engraved by Dalziel Borthers (The John C. Winston Company, Philadelphia, Chicago, and Toronto, 1894).