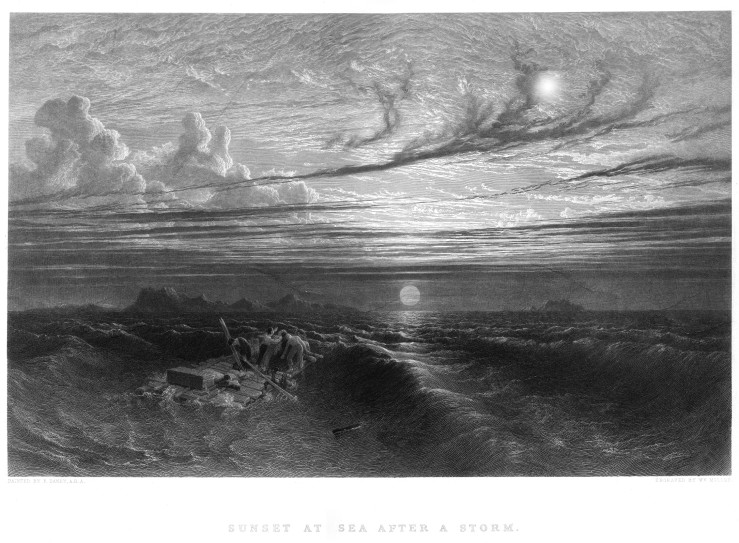 This is one of the shorter ones in this massive tome. Not the shortest, I don’t think, there’s a chapter later on that’s only a single paragraph. But this one is definitely punching above its weight class when it comes to interesting thematic and philosophical meat to chew on versus length.

SUMMARY: As the Pequod begins its first night at sea, Ishmael spots one Bulkington at the helm, steering the ship.

Hey, remember Bulkington? You probably don’t. He was mentioned very briefly in chapter 3, as part of whaling crew that had just returned from a three year voyage. He abandoned the company of his friends early in the evening, and they left to go search for him. At the time, I mentioned that he would be important later, and that was a bit of a half-truth.

This chapter is the only other time that Bulkington will be mentioned, though he is a member of the Pequod‘s crew, and is presumably around, doing stuff, for the whole voyage.

Wonderfullest things are ever the unmentionable; deep memories yield no epitaphs; this six-inch chapter is the stoneless grave of Bulkington.

There’s some interesting stuff in this chapter, but I wanted to cover one minor point first: the name, Bulkington. When I first saw that, I thought “oh man, that has to be made up entirely by Melville, it sounds so ridiculous.” I mean, Bulk-ington? As in some sort of big brawny sailor? Described as a demigod later? Gotta be an invention.

Well, turns out it’s the name of a village in central England, a name which dates back to the Domesday Book of the 11th century. At that time, it was controlled by a man named “Bulca”, so you can see where it comes from. Mystery solved. 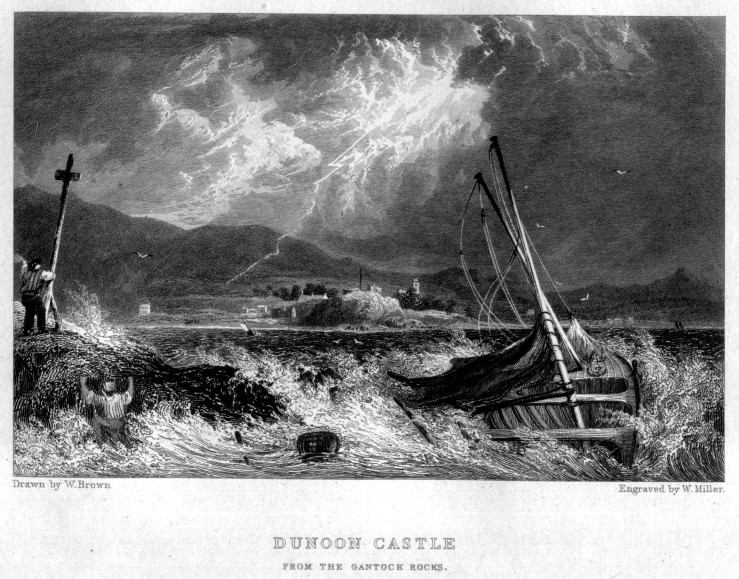 As it happens, the reference of the name is not to his bulk, but rather to a village right smack dab in the middle of the landmass of that Sceptered Isle, England, as a bit of irony, like calling a tall guy “Tiny”. You see, Bulkington cannot stand to be on the land, and finds that he must be at sea as much as is humanly possible.

Ishmael builds a metaphor comparing Bulkington to a ship in a storm, trying to keep away from land so they don’t crash or beach themselves. Even though the storm is dangerous, it is far more dangerous to stray too close to the land, which is normally far more hospitable to human life. The “lee shore” of the chapter title refers to a shoreline that the wind is blowing towards.

So it is with Bulkington. He arrives home after a long whaling voyage, and immediately signs on with another, back out onto the tempestuous ocean. Not because he loves the sea particularly, but because he must, for some reason, be at sea, there being some intolerable pain that assaults him on the land. 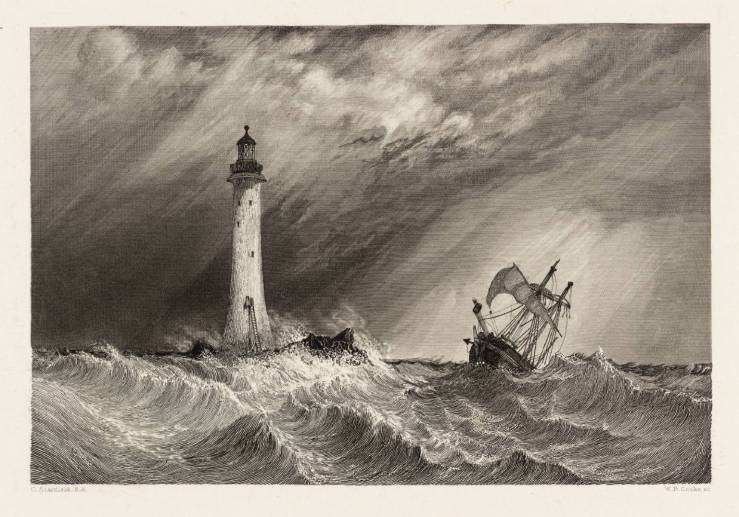 I get the sense from this chapter that Ishmael doesn’t really know any more about Bulkington than we do, and this is all in-fiction speculation. He is just amazed that someone would do such a thing, and in typical Ishmael style is spinning all sorts of wild theories and speculations and grand philosophical statements out of it. He just happened to notice a guy was steering the boat, and recognized him as a newly landed sailor from another voyage, and it was off to the races.

In the metaphor, nay, allegory that he weaves, the shore represents a sort of comfort and complacency, in a physical and mental sense. It is all the things that are “kind to our mortalities”, but prove disastrous to some deeper, more important core of our being.

Glimpses do ye seem to see of that mortally intolerable truth; that all deep, earnest thinking is but the intrepid effort of the soul to keep the open independence of her sea; while the wildest winds of heaven and earth conspire to cast her on the treacherous, slavish shore?

Ishmael elevates the process of what he is doing, philosophical musing, as a dangerous journey in wild and uncharted seas, full of chaos and confusion. In order to find your way to the true truth, you have to disregard the comfortable, the old assumptions, the traditions. You could say he’s advocating for asceticism, but I think that’s just part of the metaphor rather than the point of it.

It’s not that you literally have to give up all comforts and live in a cave or on the top of a pillar in order to think good, it’s that you have to be willing to think things that make you uncomfortable. To question the unquestionable truths that form the bedrock core of your being, the things that you cling to as a man clings to the comfort of the hearth and friends in comparison to the wild and bitter oceans.

It is, perhaps, a bit dramatic, on Ishmael’s part, but that’s in keeping with his character. One of the things I love about this book, which I’ve mentioned before, is that the narrator has a strong voice. It shows up throughout, but is especially noticeable in non-narrative chapters like this one.

The Old Ishmael who is writing this book is a character with opinions and views on things. He will stand in contrast in his character to Ahab, when he’s finally introduced in… the relatively near future.

Anyway, if you really want to see what I mean about Ishmael being extremely dramatic, check out the end of this chapter:

For worm-like, then, oh! who would craven crawl to land! Terrors of the terrible! is all this agony so vain? Take heart, take heart, O Bulkington! Bear thee grimly, demigod! Up from the spray of thy ocean-perishing—straight up, leaps thy apotheosis! 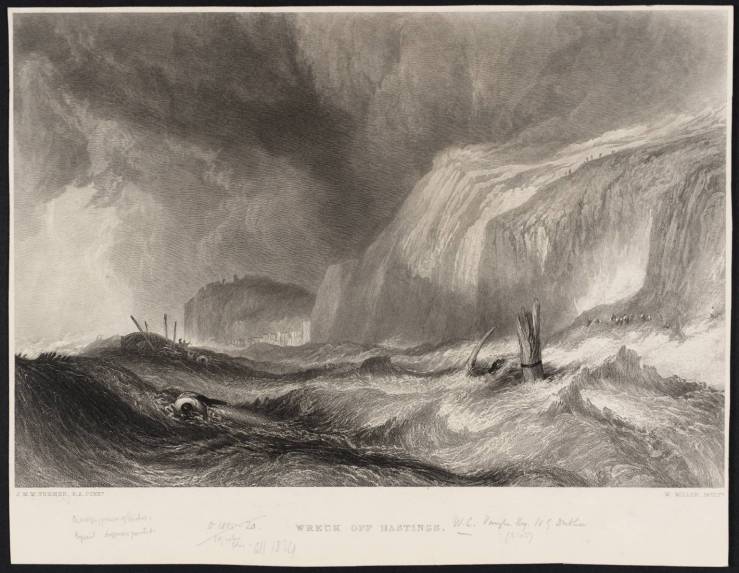 There’s another aspect to all this, which is just Ishmael’s raw admiration of Bulkington for shipping out again so soon after returning home. Way back in the first (real) chapter, we learned that Ishmael sometimes feels a compulsion to go to sea… but only after a few boring years back on land, when the depression hits him. Otherwise, he’s not a person who goes out seeking danger and glory, but rather prefers to contemplate things from a safe distance.

But Bulkington seems to be such an extraordinary individual, just from this tiny glimpse that Ishmael, and by extension us readers, gets into his life. He goes right back out after being at sea for years. What an incredible person! He must have a fascinating story, but we’ll never know what it is. This tiny chapter is the only recognition that Bulkington will ever receive, this six-inch epitaph.

It just goes to show that the people whose story is told are not the only ones who have a story worth telling. There is a bias in the world beyond simple interest, beyond those criteria that people think are what decides the stories that we know. Courage, determination, self-sacrifice, strength of will: these are not enough.

Millions through the ages have performed incredible feats and gone unrecognized. They have suffered terrible tragedies and endured unendurable pain, and go unknown to the future generations. I hate to keep harping on this humanist strain (I don’t, I love it), but you must recognize the humanity of all people, and especially the Bulkingtons. Those whose sacrifice is most extreme, and yet go unnoticed for their personal humility.

Self promotion and story telling are skills all their own, completely separate from the things that touch our hearts the most in the action of life.

Man, my original plan for this chapter was to just put the whole text of it here, and then add a couple comments and call it a day. But I realized I wasn’t giving it the attention it deserves. I’m not doing this blog, and this reading, to just skim along the surface of the book. I want to get deep in there, really tear through that olde timey language and find some sweet, sweet philosophy to feast on.

Sorry for getting gross with that analogy.