Ahhh, back from another sojourn taking care of another dog. Feeling refreshed and restored! Well, after a few extra days of rest, that dog really kept me busy. 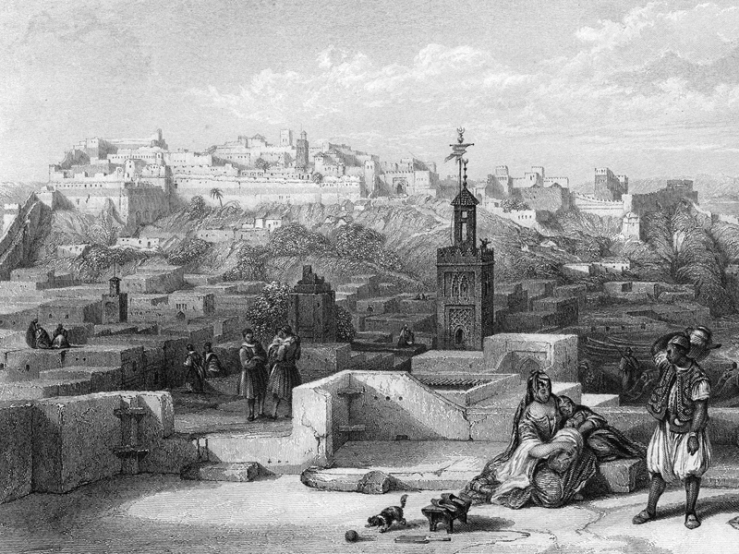 I actually took the notes for this chapter before my sabbatical of canine stewardship, so I had plenty of time to reflect and ruminate on this chapter. There isn’t a lot of direct philosophical meat, but it definitely suggests some topics that are of interest to me, and, I hope, to you as well.

SUMMARY: Ishmael returns to the Try-Pots to find that Queequeg is still fasting in prayer in their room. He leaves him alone for the afternoon, out of respect for Queequeg’s religion. But after he fails to appear at supper, Ishmael becomes worried, and finds that the room’s door is locked. He fears that Queequeg has suffered some medical emergency, and rushes to get the door open. The landlady has keys, but they don’t open the deadbolt. Ishmael rams the door open, and finds Queequeg just as he left him, still in prayer. He won’t move an inch, despite Ishmael’s pleading. It’s not until the next morning, when the sun enters the room, that Queequeg finally relaxes and joins Ishmael in bed. Ishmael argues that fasting and mortification of the flesh are pointless and harmful, but it falls on deaf ears. Queequeg is too self-assured to be swayed by any argument.

This chapter is another fun one, with some good comic business involving the landlady, Mrs. Hussey. Queequeg snuck down and stole back his harpoon, and is locked in with it, so she fears immediately that it’s another suicide.

“He’s killed himself,” she cried. “It’s unfort’nate Stiggs done over again—there goes another counterpane—God pity his poor mother!—it will be the ruin of my house. Has the poor lad a sister? Where’s that girl?—there, Betty, go to Snarles the Painter, and tell him to paint me a sign, with—“no suicides permitted here, and no smoking in the parlor;”—might as well kill both birds at once. Kill? The Lord be merciful to his ghost! What’s that noise there? You, young man, avast there!”

Ah, there’s that old fashioned down-to-business, Quakerish, New England attitude. Someone died? Well, let’s just do what we need to, and hope it doesn’t effect the business too much.

Anyway, backing up a bit, at the beginning of this chapter we get our first (I think?) indication of Ishmael’s religious background. He’s a Presbyterian, and I really don’t have a strong notion of what that means, exactly. Some flavor of protestant, certainly. The precise distinctions between the various milder sects of protestantism are difficult to parse, even at the best of times.

The thrust, though, is that he takes a very tolerant view of other religions, no matter what they are. As long as it’s not hurting anyone, who is he to judge? It all depends on context, and removed of proper context all religions seem more than a bit ridiculous. What is a sacred and ancient ritual to you just looks like a bunch of kids lining up to get a snack to someone from the other side of the world. It’s good to be charitable.

Throughout this chapter, Ishmael refers to Queequeg’s ritual fasting and mortification (he’s squatting “on his hams”) as “his Ramadan”. This is referring to, of course, the Islamic practice of fasting during the month of Ramadan, during the day. I suppose it is used here, instead of the christian term Lent, to sort of set this as a strange, foreign custom. But, it got me thinking about the relationship between Islam and the United States.

In more recent decades, there has been a narrative going around the US and Europe and the Middle East about a sort of clash of civilizations between Christianity and Islam. How they’ve always been enemies, going back to the crusades and the reconquista, struggling for supremacy for all of history. But that’s not really true. Nothing that simple could ever be true.

Indeed, the United States actually has a long, friendly relationship with North African countries, especially Morocco. They were the first nation in the whole world to recognize the independence of the US, in 1777. Lacking any sort of navy, the US was in dire need of recognition to protect their ships at the time, and they received it from Morocco without even asking.

And this got me thinking about the United States and colonialism. What a shame it is, that this very first colony to break free from the bonds of its home country should end up falling into the same pattern of abuse! Rather than being the champion of colonial independence, they fell back into the pit of snares of European politics. Well, also racism, that’s always a factor in America.

Ah, when idealized, utopian visions come into contact with reality, with hardness, with pragmatic bad actors who want to keep things the way they are, they never succeed.

But, I really ought to get back to the text.

Ishmael has a theory about the origins of religious intolerance and strife: stomach problems. You get an idea in your head that you’re going to glorify your god by not eating, get an upset stomach, and make all sorts of rash decisions and statements that lead to inevitable conflict and suffering. Including rituals that induce these same stomach pains in others, that they may follow in your footsteps. It’s best to simply treat your body well, keep your mind alert, and believe what you believe with your full, unvarnished conviction.

This points to a sort of different notion of what the divine is, and how it might be accessed, I think. There are old traditions in many religions about altering the state of your mind or body in order to be able to contact some sort of divine presence. Going into caves to breathe in vapors, refraining from food, or actively taking hallucinogens. And they’d say, yeah, it makes your mind all foggy and altered, but that’s the whole point! That’s the only way you can get to the real important stuff, it simply doesn’t work if you keep a clear head.

But Christianity, and protestantism in particular, has a tradition of applying logic and reason to religious matters, and trying to tackle them head-on. There is a sort of internalized doubt, that comes from allowing everyone to sit down and read the bible from cover to cover and thus see how it doesn’t really hang together that well. Perhaps a bit of lingering persecution complex, which suffuses christianity to this day, like oil in an aromatic candle.

In any case, there is no shortage of christian philosophers who have tried to prove the existence of the divine in one way or another. They want to be able to say that it is irrefutable, that it simply must be so, to be able to shut down any argument on its own terms. Concerned only with the particular abstract construction of pure logic rather than the phenomenology of what people actually experience in their everyday life, which was the original purpose of approaching it logically in the first place!

Ah, I’ve studied a lot of these supposed proofs, and they don’t really amount to a hill of beans, to my mind. Like Ishmael says, religion isn’t something you can really argue your way into or out of. It’s just something we all have to accept, in ourselves and in each other. Fretting over it isn’t going to get you anywhere. It is best to be charitable, and not assume that you know better than anyone else. We’re all just trying to muddle on, in the end.

Towards the end of the chapter, Ishmael asks Queequeg if he’s ever gotten a stomach ache, a possible source of his poor religious practices. He mentions that after a big battle back in his homeland, they hosted the traditional barbecue to eat all of the slain. Ishmael calls it quits at that, but it got me thinking about the logic of cannibalism in the south Pacific.

It makes sense, really. Resources are scarce, especially meat. You fight a battle, and the people who died aren’t going to get any more dead. Queequeg also mentions that they would send back the bodies of the dead to their own tribe to be eaten, as a sign of respect. In that context, it only makes sense. And I can believe that these are the real practices, as Melville did in fact spend quite a bit of time stranded in the south Pacific, and wrote about it extensively.

One final thing: There’s a passage about Mrs. Hussey, when Ishmael is first asking for help getting into the room to rescue Queequeg from himself:

Mrs. Hussey soon appeared, with a mustard-pot in one hand and a vinegar-cruet in the other, having just broken away from the occupation of attending to the castors, and scolding her little black boy meantime.

What on earth does this mean? A mustard pot is obvious, and a vinegar cruet is just one of those glass bottles with a metal spout that has been filled with vinegar. What are these castors she’s attending to? My meager research skills have failed me. It’s a type of bean, and a term for the wheels on an office chair, but I have no idea what it has to do with vinegar and mustard. Some sort of sauce, I suppose? 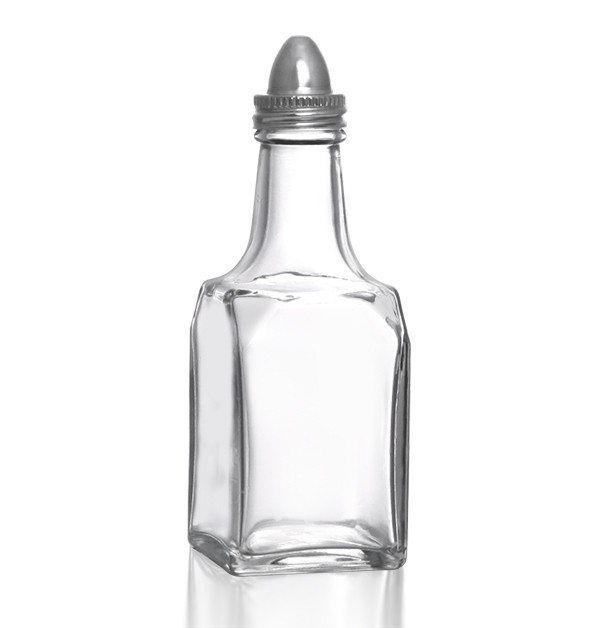 Ah,this is always a problem when you read books from 150 years ago. There are some things that were commonplace back then that are completely obscure now. Usually, it’s something minor like this, but sometimes it’ll be a kind of hat someone is wearing or an architectural feature, and I’ll run myself ragged trying to discover its meaning.

Context is all-important, and yet impossible to recreate. You can only see the work as it is now, removed of its original place and time.

Ah, that was a fun one. I keep reminding myself that I’m doing these to report my reflections on the book, not just report on what happened and explain references. I lean in that direction a bit too much, at times. It’ll be easier to stay on track when the book starts getting more philosophical itself, after Ishmael and Queequeg actually set off on their fateful voyage.

Photo of a Cruet, from Bar dot com.