Today we’ve got another fun chapter on our hands, but one that moves the plot a bit more. Ishmael and Queequeg have to get themselves situated on Nantucket, so they can look around and find a ship to ship with.

Sorry I’m a little late this week, I was off dogsitting again. It’s nice to take a bit of time away from the old computer desk every now and then. But let us get on with it!

SUMMARY: Ishmael and Queequeg arrive on Nantucket and seek out the inn recommended by Peter Coffin, the Try-Pots. Eventually they locate it, by its sign of two black pots, and settle in for dinner, which consists of incredibly delicious chowder. As they go up to their room, Queequeg is made to relinquish his harpoon, they are not allowed in private rooms at the Try-Pots after previous harpoon suicide.

It’s a pretty short little chapter, but is one of the lighter, more digestible ones, with a bit of fun comedy in there too. Ishmael misunderstands Mrs Hussey when she asks what he wants for dinner, as she is being very terse and wants to get back to scolding a man outside the inn for some reason. They have trouble finding the place, due to confusing directions given by Peter Coffin. Ishmael jokes about eating too much chowder, calls on Queequeg to spear a stray eel in his bowl.

In all, it’s a very cozy chapter, offering the feeling of warmth of coming in from a cold, hard day’s voyage on a boat into a familiar place. This offers, I say, more evidence that this is written from the direct perspective of an older, more experienced Ishmael, who has been to the Try-Pots many times. It is not written as something that is actively happening, right now, but as a fond remembrance of a better time. 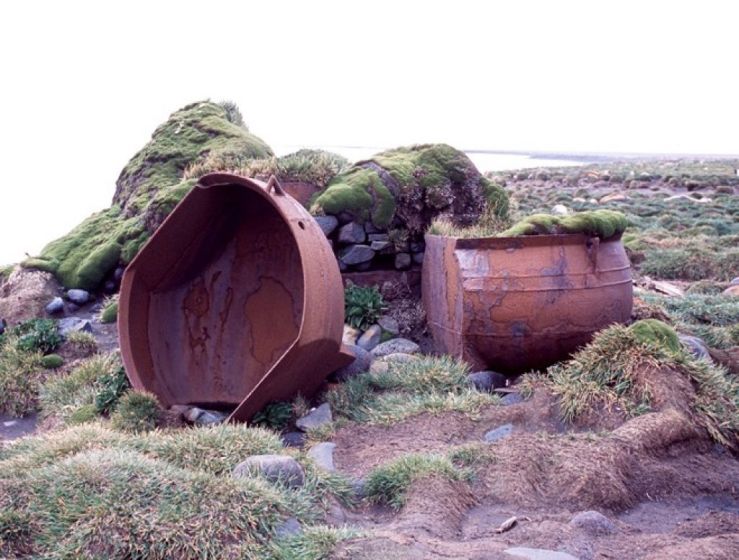 When they first locate the Try-Pots, they do so by it’s Sign. Not the kind of sign we generally think of nowadays, with words in large letters, but more of a symbol. Two big wooden pots, painted black, hanging from a wooden mast. It puts Ishmael in a morbid mood, seeming to be an omen of death combined with some recent occurrences on his journey. The last name of his first innkeeper was Coffin, then he went to that church and studied all those tablets relating tragic death, and now two big pots, one for him and one for Queequeg, hanging from a gallows!

Ishmael says, somewhat euphemistically, that these are “oblique hints touching Tophet.” Well, perhaps not as a euphemism, but as an example of the biblically-tinged language that Melville employs throughout the book, to give it a bit more gravitas. But it got me thinking, I’ve been missing some of the biblical references that are being made, because there are just… so many of them. So, since this chapter is so light, let’s take a little time and run through them.

First off, we’ve seen a couple of references to “Tophet” before, back when Ishmael literally stumbled into a black church in New Bedford. But what is that, exactly? Well, to put it simply, it’s one of the many, many names used for hell by Christians. It is actually exactly the same place as Gehenna, or Gehennom, being the actual valley of Hinnom, which is located near Jerusalem. 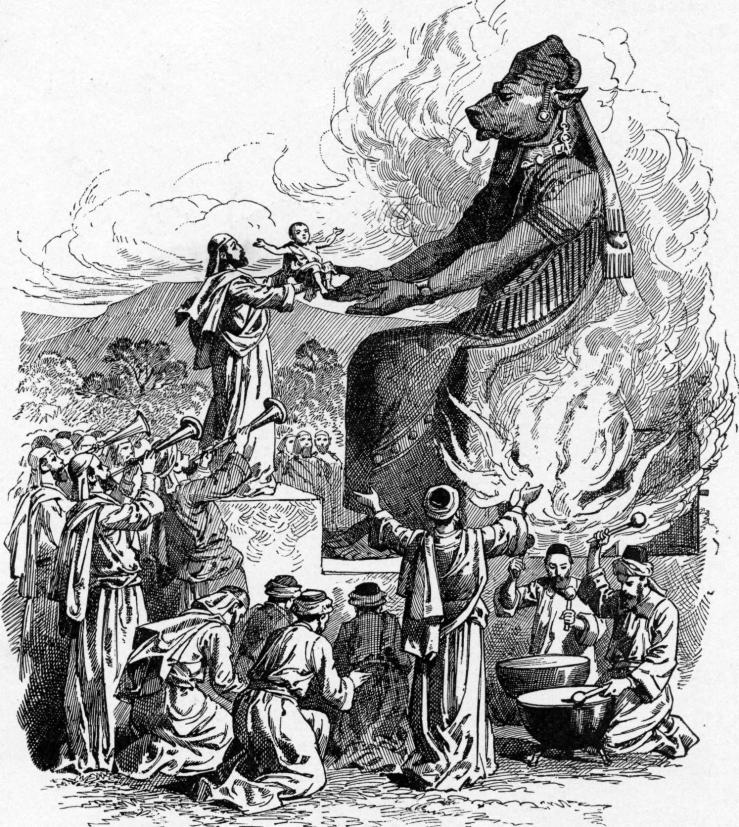 Why was this valley considered such a terrible place? Oh, probably because of the all the children who were burned alive there as sacrifices to the gods Moloch and Baal. Human sacrifice, especially of children, was pretty common in ancient religions, one of the big things that made Judaism different was that their god actually didn’t like human sacrifice; so eventually it was banned by King Josiah, and Tophet was defiled so no more sacrifices could be made there (2 Kings 23:10). There is even a theory that the oldest version of the Binding of Isaac, from the book of Genesis, had Abraham actually go through with sacrificing his son. The bit about him being warned off at the last minute was a later addition.

Ah, friends, religion, like all things, is a very complicated business. There are reams and reams of information and theories and philosophizing and explanation about all of these things. But you can see the throughline, the place where people practiced something so horrible as child sacrifice by fire becoming a place that is cursed. A place where horrible things happened is generalized. It becomes the general Bad Place, which then becomes the place where bad people go when they die. Thus, even into the modern (relatively speaking) age when Moby Dick is written, it is still a term used for hell, when you want to be more indirect and poetical.

Anyway, the proprietor of the Try-Pots is named Hosea Hussey, and Hosea is another biblical name. A prophet, considered by Christians to be a Minor Prophet, and by Hebrew tradition one of the Twelve Prophets. His name meant “he saves” or “he helps”, which is rather appropriate for the man running an inn that also serves incredibly tasty chowder.

The innkeeper at the last inn, Peter Coffin, also has a biblical name, obviously. Saint Peter, the man who had the keys of heaven and earth, the rock on which the church is built. “Peter” literally comes from the Greek “petros”, as in a rock. Peter was famously unreliable and somewhat dim as a disciple, and yet Jesus elevated him to be the foundation of the new church of Christianity. I wonder, could there be some connection between the somewhat dubious yet ultimately laudable character of Saint Peter, and the skylarking innkeeper Peter Coffin? Probably not, I’m sure it’s nothing.

Hmm, let’s see, are there any other biblical names I haven’t talked about yet… ah. Yes there is one, that’s a little important: Ishmael. As you know, Ishmael was the first son of Abraham, back when he was called Abram, but not the first legitimate son. He was born from Hagar, the handmaiden of Abram and Sarai (not yet Sarah), because the latter had had no luck with bearing a child. Hagar was in despair over being a child for another woman, but an angel of the Lord came to her directly and told her that her son would be the patriarch of a great nation. So, she bore it for the time being. 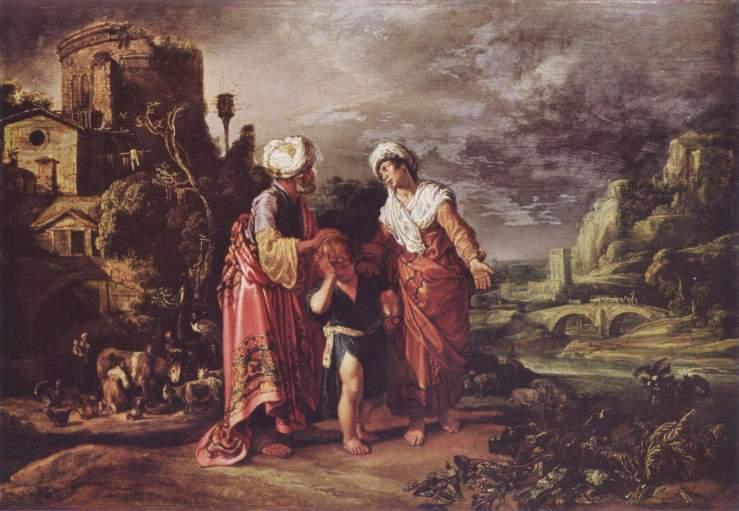 But, eventually, Sarah did have a son of her own, Isaac. God had assured Abraham that his own, real son would have the full inheritance, and Sarah wished for Hagar and Ishmael to be thrown out, and so they were. Abraham didn’t want to send Ishmael away, he had been raised as his son! This was when Ishmael was 13 years old, not exactly a tiny child anymore. But Abraham was assured that Ishmael was blessed by God, and would indeed become a great nation of his own, so sent him off with his mother into the desert.

Ishmael went on to have 12 sons, all of them great and powerful princes. This gave rise to the Ishmaelites, who by tradition became the Arabic people. Ishmael is considered a very important patriarch in Islamic traditions for this reason. There is actually some supporting evidence for this, other ancient sources make mention of some of the same names as important princes among the Arab tribes. Muhammad himself is considered a direct descendant of Ishmael. 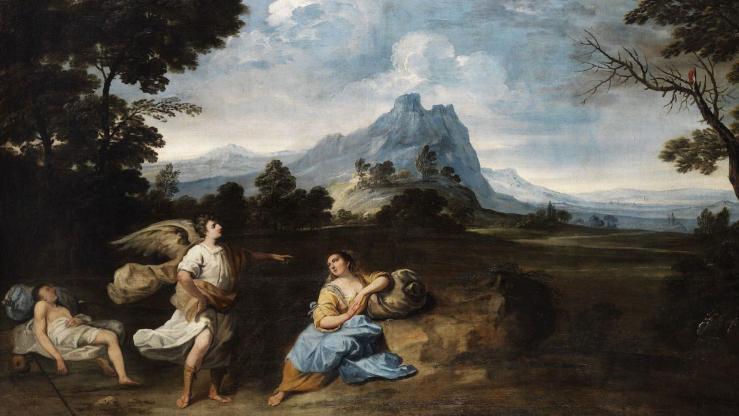 There is, of course, a tremendous amount of commentary and battling interpretations of this story and how it came to be, what the lesson is supposed to be, how it fits into the greater narratives of Genesis, and so on. The question I’m interested in, though, is how is any of this relevant to our narrator in Moby-Dick; or, the Whale?

Ishmael is the first son of Abraham, but not the one who inherits. His role is go away, to wander in the wilderness, to survive against all odds in the desert. But he does survive, in the end. To my mind, this is the most relevant part, that relates most closely to the Ishmael we know, who finds himself alienated from his fellow man and must seek companionship among the waves. It’s no coincidence that he intends to go on an exceedingly long and dangerous sort of sea voyage, a whaling trip, out there on the vast ocean for years at a time.

The name of Ishmael is another portent of what is to come. Which only makes sense, as it is likely not his real name. Indeed, Ishmael himself never says that it is, only that it’s what we ought to call him, way back in the very first line of the book. He has given himself this name, as a sort of omen of the journey ahead. He finds himself with nothing to keep him fixed in the world, no inheritance and no family, and so goes off to wander in the wilderness for a while.

Well! That ended up going some places. Honestly, I find this biblical stuff fascinating, and I could talk about it all day, but I’m no expert. It’s a great example of how everything that has ever happened in history is much, much more complicated than you could ever imagine.

Ah! This great tome, Moby Dick, is itself derived from countless even older, ever greater tomes. It is decanted wisdom, concentrated into something slightly more manageable. And yet, it is famously dense and difficult to work through! How times change, and yet ever remain the same.